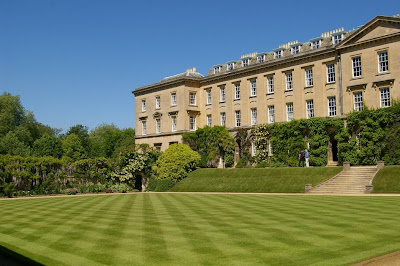 Front Quad, Worcester College
Worcester College may not be one of the more famous of the Oxford colleges, but it has what many of the others lack - a really progressive and dynamic gardening team, with large gardens and grounds to work in, and crucially, the support of the college for their work. The gardeners maintain their own blog, under the acronym wocogaga...(see links). When  I was an undergraduate the grounds of Worcester were pleasant enough, with their lawns and lake (the regularity with which duck appeared at guest night dinners was attributed to the latter feature), but there was nothing special about the gardening. Last year, however, the garden won a well-deserved Gold medal from the Oxford in Bloom campaign. 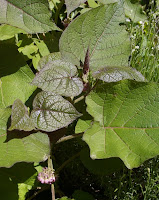 We went round yesterday with Simon Bagnall, the Head Gardener, having called in to swap plants. They are busy getting out their summer plantings - tender perennials are one of their specialities, flowering well in late summer and autumn when the undergraduates return. With numerous walls they have particularly warm conditions for those plants that appreciate extra heat: it was interesting to see Cyphomandra betacea (left) sprouting from the base and already flowering against a wall in the Front Quad, for example. Elsewhere the large-leaved Mexican oak Quercus candicans is doing well, and in the Provost's Garden one of the wollemias is again in full cone, having been only the second in the country to produce female cones. 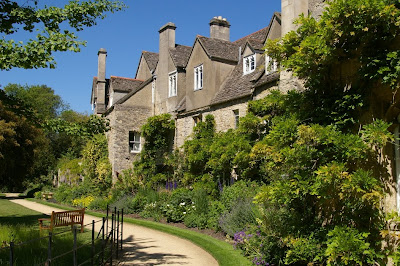 border alongside the mediaeval 'cottages'
Posted by John Grimshaw at 08:05