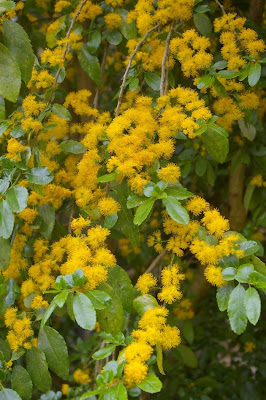 Working in the garden at Colesbourne Park for the past two days, preparing and planting up the summer borders, I have been enjoying the wonderful fragrance of Azara serrata (above).  This is a large shrub or small tree - that difficult distinction - from Chile and on DNA evidence now placed in the Salicaceae, instead of in the former rag-bag Flacourtiaceae. The specimen here was said to be of wild-collected origin when I bought it from Batsford Arboretum in 2003, but there was no data with it, unfortunately. Planted against a north-facing wall, but receiving full sun, it has flourished and is now about 4 m tall. I have pruned it to keep it a fairly narrow, more or less single-trunked plant, otherwise it would probably be a good deal wider than it currently is (pic below). It is fully hardy here - occasionally a tip of a new shoot may be singed in winter, but that is all.

The chocolate fragrance of Azara microphylla is well known, but its flowers are very inconspicuous. For some reason I had failed to notice the fragrance of A. serrata before but it is delicious and scents the air around for some distance - exactly what one wants from a scented plant. But what does it smell of? There is something of the linden about it, but to me it is exactly like the scent of the African genus Dombeya - not very helpful perhaps, but describing scents is so difficult. Next time I sniff Dombeya I may have to think it smells of Azara... 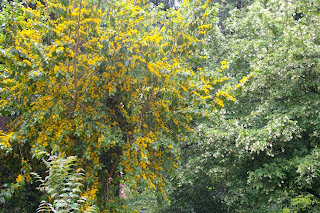 Just beyond the Azara is a much older plant, a huge Staphylea colchica that is one of the glories of the garden when in full flower in May. The flowers are a 'soft' white, with a hint of green, opening from greenish buds - the pic below was taken in May. It still has a smattering of  flowers left (see above, right of the Azara), but they are quickly turning into the characteristic three-pronged bladder-like fruits. It too is delightfully fragrant - it smells of Staphylea - but does not release the perfume to quite the same extent as the Azara does. 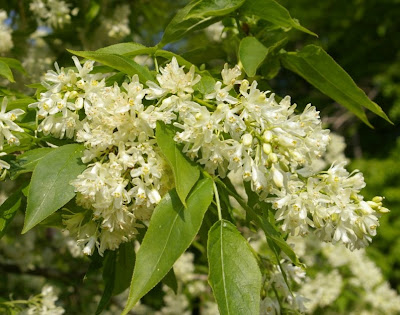