My Plant of the Year 'award' is given to a plant that has given particular pleasure in my garden during the course of the year, performing well and looking good during its season.There were three candidates this year: Salvia 'Amistad' for its exceptionally long period of flower; Dahlia 'Etheral' for its long season of charm and Dahlia 'Twyning's Revel' for its impact over several months. In the end I have decided for 'Twyning's Revel', whose vibrant colour never failed to draw attention, but yet worked well with plants around it.

There are a number of dahlias with the prefix Twyning's, the best known of which is 'Twyning's After Eight' with single white flowers over dark foliage - fun, but I find it difficult to combine with other plants. All have been raised by Mark Twyning, of Winchester Growers in Cornwall, who hold the National Plant Collection of dahlias. An interesting article was written about him and his plants by Val Bourne in The Garden, September 2010. He favours singles in unusual colours, and many of his plants are becoming increasingly well known. I shall certainly seek out others for next year. My plant of 'Twning's Revel' (raised in 2007) came from Avon Bulbs, as a beautifully grown rooted cutting (along with several others), arriving just before I went south for Chelsea. I had the choice of leaving them indoors in sub-ideal conditions (low light and still air), or putting them in the ground directly. As there were signs that the weather was then finally warming up I put them out, where they took off and flourished brilliantly.

The flowers on 'Twyning's Revel' are a mixture of intense pink and orange, but set against the excellent dark foliage the combination works, and at least with their immediate companions in the border there was no clash of colour. I think one would have to work out placement and companions carefully if planting a mass of them, but it would certainly make a statement in the garden. I will propagate mine next year by division of the tubers and by cuttings if possible, but the Avon Bulbs spring catalogue arrived yesterday and I see that they are again offering cutting-raised plants for May delivery. They and Winchester Growers are the only sources listed in the RHS Plant Finder 2013.


For the past few weeks a succession of storms has lashed the British Isles from one direction or another, with or without much rain and causing varying degrees of damage and flooding. In this area we have been lucky to escape without too much of either but the wind ravaged the standing perennial stems in the garden, leaving most stripped and far from upright. I have written before (13 December 2010) of my struggle to like the fashionable habit of leaving perennials to stand through the winter and, although I keep trying, the longer they hang around the more irritated I get with them. With the wind having wrecked most of what charm they had, I took the opportunity of calm sunny days this weekend to get outside and raze them to the ground - a very satisfying operation, and to my mind, greatly enhancing the garden's appearance. I also had time to break out one compost bin and start mulching the border, another pleasing task with an attractive result. As always, though, there won't be enough to do the whole border, but the other bin will at least enable the patch visible from my study window to be done properly.

Before Christmas I was also able to take advantage of a couple of reasonable days to make progress on the pathways defining the lawn and the gravel beds made in summer. This entails reshaping of the lawn and the drive border, which both need further work, but the coarse flint-gravel path is now in to define the shape to work to. The gravel bed looks a bit barren at present but is full of bulbs and alpines that should perform well next year - many bulb noses are already pushing up promisingly.

I have been south for Christmas, staying with my parents at Maidenhead and being fed by my siblings in Surrey. The weather was pretty gloomy and dank between gales, but on Christmas morning I took a turn round the garden with a notebook to record what was in flower. I've since lost the notebook, but the list was skimpier than in many years (no Crocus, no Cyclamen coum) and the winter-flowering shrubs had few flowers open. Notable were three clones of Iris unguicularis in flower - a typical form, 'Walter Butt' and 'Mary Barnard', and the big clump of Galanthus plicatus 'Three Ships' by the gate.

A pleasant diversion: Season's Greetings from the University of Oxford 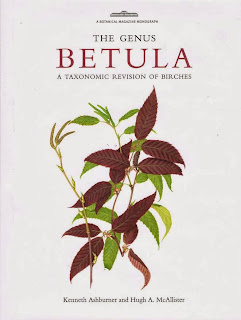 
During the course of the autumn a very frequent remark in any conversation between gardeners has been 'how good the Sorbus have been this year,' so before it's too late I thought it would be good to celebrate this here. A few species have indeed featured as images in the past couple of months but here is a gallery of others, all pinnate-leaved true Sorbus, that have caught my attention. In reviewing my images the other thing worth mentioning is how fine the weather was for so long this autumn, a counterweight to the horrible protracted winter- although that was probably responsible for the superb crops of Sorbus berries by delaying the flowering until it was warmer and there were more pollinators around. These images were mostly taken of trees in the Yorkshire Arboretum, where we have a good collection (though the nomenclature needs work), but some are from elsewhere, as noted.

While hanging up some laundry to dry in the spare bedroom this morning, I noticed the sun was catching the inflorescence of my plant of Haemanthus deformis on the windowsill, so went for the camera.

The genus Haemanthus (Amaryllidaceae) comprises 22 species from South Africa, of which the pinkish-red flowered H. coccineus from the Cape is probably the best known. It was one of the earliest South African plants to be imported to Europe, early in the Seventeenth Century. H. albiflos is also quite commonly grown, as an almost indestructible houseplant, with white flowers in tight heads. According to Dee Snijman, in her book The Genus Haemanthus (1984), H. deformis has at times been confused with H. albiflos but they are quite distinct in many different ways, notably in the foliage. In H. albiflos the leaves are hard-textured and usually recurved, and 4-6 may be present at any time, whereas in H. deformis there are only two at any time. They are softer and firmly adpressed to the ground. In a pot this is challenging for them, so they do their best and mould themselves over the rim. The inflorescence appears from between the leaves in early winter, in its early stages being seemingly squeezed out  in a narrow wedge.

As with all Haemanthus the inflorescence is formed of a number of flowers held between bracts, which with the protruding stamens gives it the look of a shaving-brush. I think H. deformis is a very pretty plant and prefer it to the red-flowered ones I grow, now rather coarsely in leaf having flowered in September. It comes from the Eastern Cape and southern Kwa-Zulu Natal: this plant, given to me by a friend several years ago, was grown from seed collected near the coast in Eastern Cape. It just sits on the windowsill (greenhouse formerly), gets watered occasionally, and does its thing. Eventually the old leaves get ratty and die back, but the new pair has usually replaced them before they are completely withered.

Haemanthus may not be the showiest of bulbs, and the large leaves of some can be inconvenient, but they are attractive and interesting and have a modest following - there's even a Facebook group devoted to them.