The Butterflies of Britain and Ireland 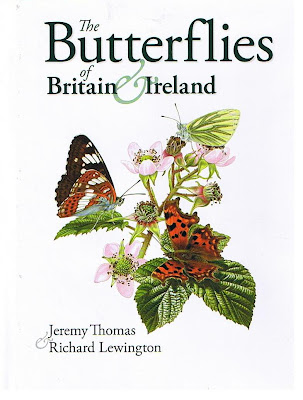 For my mother's birthday a few weeks ago, I bought her a copy of The Butterflies of Britain and Ireland, by Jeremy Thomas (text) and Richard Lewington (illustrations), recently published by British Wildlife Publishing (RRP £24.95). It was such an attractive book that I had to have a copy for myself...

This is a re-worked version of the authors' book of the same title that originally appeared in 1991, but has been substantially extended in size, scope and number of illustrations to take into account the research of the past twenty years. As they say in the introduction, Britain's butterflies are the most rigorously monitored group of insects in the world, and the rise (a few) and fall (rather too many) of the fortunes of our native species over the past few hundred years are carefully detailed in the very engaging text. Without any formality one feels that the account for each species has told you almost everything one could wish to know about its subject, while the exquisite illustrations show all stages of the lifecycle for each of the 72 species covered, with adults shown in characteristic postures as well as in the familiar, but actually rather infrequently seen, wings open position. My interest is in identifying the species that come through the garden, and learning more of their stories; the commentary on food plants is also of considerable interest. There is no overt attempt to suggest gardening for butterflies (difficult in any case for most species), but the suggestion (for example) that one might plant a few Buckthorn bushes to encourage Brimstones is worth following.

I think this is set to be a classic of British natural history and the authors and publishers are to be heartily congratulated on producing such an excellent book.

Incidentally, the publishers' flagship is the also excellent quarterly magazine British Wildlife, which is one of the few journals I usually do read cover to cover, covering every aspect of its subject. More information is at http://www.britishwildlife.com/
Posted by John Grimshaw at 17:59