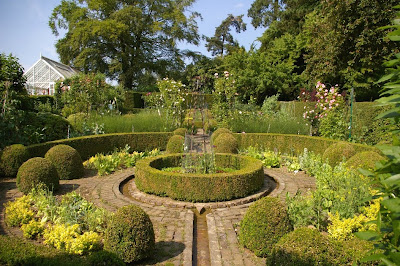 The potager, Icomb Place
It is blazingly hot today and the breeze, while personally welcome, is only compounding the horticultural problem of rapidly drying-out soil. Unlike most of the nation we had no interest in staying inside, but not wanting to travel too far had a look in the Yellow Book for inspiration. It turned out that Icomb Place, near Stow-on-the-Wold was open today, its only opening in the year, so off we went.

Icomb Place, home of Mr & Mrs TLF Royle, is a beautiful large Cotswold house with a superb view. In parts it dates to about 1420, but developed into a grand Tudor manor house. A Victorian restoration removed part of the original buildings, but fortunately failed to replace them. The house is not open to the public. 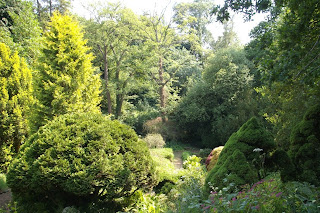 A previous owner, Capt Simpson-Hayward, developed a fine garden in the steep-sided valley behind the house in the 1920s-30s, and was one of the first to open for the National Gardens Scheme. The remnants of this are still visible, showing how attractive it must have been, with a series of pools in the valley surrounded by 'Himalayan' plantings - rhododendrons, conifers and bamboos. The conifers are mostly now enormous, the bamboos, Japanese knotweed, Petasites and Trachystemon are rampageous, but there are still some rhododendrons and just a hint from a crest or two among the ferns that at one time there were interesting varieties grown here. A gully rock garden, with a spring-fed stream runs downhill from near the house (pic above), and although very overgrown, with numerous 'dwarf' conifers now being rather large, one can again see that it must have been a fine bit of gardening in its time. Work is being done to control the worst weeds, and some nice new trees have been planted in recent years, complementing the mature Victorian plantings around the house. 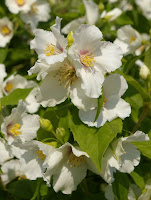 Adjacent to house is a charming typical Cotswold garden - no high horticulture perhaps, but very appropriate with herbaceous borders and roses, and delightfully scented by lindens and Philadephus. The potager, installed by the Royles, is exceptionally attractive, with crisply-cut box edging and balls surrounding the beds, while a trickling rill runs through the brick paving and out to a small fountain under a cupola. There we had tea, particularly enjoying a delicately lavender-flavoured cake - definitely one for the repertoire.