It has been a lovely weekend and I've been busy in the garden, mostly planting bulbs but also tidying, dead-heading and finishing the new gravel beds. The garden is full of colour and interest, but among everything a small clump of Colchicum speciosum 'Album' stands out for the pure beauty of its flowers. It is always a favourite and this year it has been able to develop to perfection  in dry weather. These plants are derived from a single corm bought from de Jager in 1983: I can't recall how much it cost, but at the time it was an expensive purchase for a schoolboy, certainly the most expensive plant I'd bought to date.

E.A. Bowles wrote of it fondly in  My Garden in Autumn and Winter (1915) and it is worth quoting his comments here:  'It is now many years since I first saw the glorious white form of C. speciosum. It was in Messrs. Backhouse's nursery in York, and there were then only three bulbs of it in existence and they were worth their weight in banknotes. I next saw it at a Royal Horticultural Society's Show, a few in a pan, and still at a price only suitable for millionaires. But this most beautiful of all autumnal bulbous plants happily possesses a good constitution, and has increased so well that now a shilling will purchase one, and no garden in the temperate zone should be without it. The purity of its whiteness is as perfect as one can desire; the substance of the flower is almost as firm as a White Lily's petal, and the greenish tinge of the tube is just right to set off the purity of the rest. ... It must have been a happy day for the man who first discovered it in the seed bed, for apart from any visions of the monetary value of such a fine novelty he must have felt a glow of satisfaction and benevolence when realising what an amount of pleasure so beautiful and so hardy plant would give to the lovers of beautiful flowers. I would rather have been the raiser of C. speciosum album than to have owned a Derby winner.'

I see from a handy bulb catalogue that the retail price is now around £7.00 per corm, which seems a lot more than Bowles's shilling, but the Bank of England inflation calculator suggests that a shilling in 1915 would now equate to £7.25, so there hasn't been much change in a century. 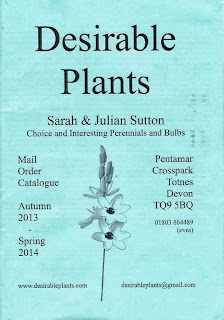 Posted by John Grimshaw at 22:30 No comments:

A wedding - itself very splendid - took me to North Wales yesterday. This morning I went straight to Bodnant in time for opening, getting in just before the busloads arrived - though not much before. One disgorged its American contents soon afterwards and I watched in fascination as they were led round at breakneck speed, reappearing down further and further terraces as I pottered along. I was pottering because there was a lot to see - Bodnant is a truly great garden. It was my first visit there, and I am impressed: it is very far from the usual run-of-the-mill National Trust style of gardening, and I shall find my way back there next year to see the spring display.

This weekend saw the Yorkshire Arboretum's annual Wild About Wood Festival, our principal fundraising event of the year. For a small organisation it's a huge task to get it off the ground and although the whole team is involved, along with 80 stalwart volunteers, much of the work falls on the shoulders of Anna Porter, our Marketing Manager, with her hard work and meticulous planning paying-off on the day. The festival's attractions include vendors and exhibitors, mostly trading in and working with wood and wooden products, but diversifying into a broad range of related activities. Our own education department runs the Discovery Zone, an assemblage of activities for children on various themes of natural history and incredibly popular, with some activities booking up very quickly indeed - at least one family came back for the second day having been unable to complete all the options on the first!

Saturday (when these pictures were taken) was a lovely day and we had a record turn-out, but the forecast for Sunday was dire and although it turned out less bad than predicted, it had evidently put a lot of people off. Despite this, and the occasional heavy showers, everyone seemed to be remarkably happy and having a great time. Financial success is something to hope for from such events, but to judge by the very many, very happy people I saw around the arboretum on both Saturday and Sunday, it was certainly a success with our visitors.

Early September in the garden


Although the days are shortening and nights are getting chilly there is still a lot to see in the garden, and much to come. The really warm weather came to an end on Thursday, with a shift to cooler westerly air on Friday. This brought torrential rain to the arboretum but hardly a drop fell here, less than ten miles away and I've actually had to have the sprinkler on to alleviate the drought.

My parents, Susan and Peter Grimshaw, have jointly produced this piece about picking blackberries, which is worthy of a wider audience:

"There is a veritable glut of Blackberries this year, they are hanging like bunches of grapes on the bushes.

As we have been picking blackberries together for 49 years now, we have written a Guide as to how to go about it.

1]   Before you set out dress up like a TRAMP.  Brambles not only stain your clothes, they also Rrrrrrrrrrip them.   Do not forget a hat, brambles also tear at your hair.

2]   Take several small containers with lids with you, rather than one large one.  If a stray length of bramble surreptitiously trips you up it is less frustrating to spill a small amount of fruit than a big tub-full.

3]   Remember that the best berries are all either just out of reach or deep in a bed of nettles, therefore take a walking stick and a supply of dock leaves with you.

4]   Find some bushes in a pleasant rural place.  Do not pick from bushes overhanging busy roads.   You do not want to be eating chemicals from car exhausts.

5]  Pick carefully.....the berries should be:
a]   black
b]   glossy, not dull looking
c]   swollen, not hard
To pick, hold berry gently and give a light tug.  If the berry does not come away with a light tug, it is not ripe.  If the berry comes away without a tug or if it squishes in your fingers it is over-ripe and should be discarded.

6]   Do not pick at a level below which a dog might have cocked his leg.

7]    Enjoy the wildlife around you, blackberry bushes are full of interest, Gatekeeper Butterflies for example seem to love brambles.

8]  Let your imagination run riot, pretend you are a primitive Hunter-Gatherer finding delicious seasonal food for your family.    Realise that you have in fact temporarily become a Hunter-Gatherer and actually are finding a supply of delicious, healthy, FREE food.

Having taken your berries home weigh them to see how well you have done.
Before using them wash thoroughly unless you want a bit of body in your jam or pie.   Blackberries usually harbour a range of small caterpillars, spiders, chafers etc.

You will almost certainly soon discover that a lot of little prickles have embedded themselves in your anatomy, most particularly in your fingers.  These can be quite painful.   Nine out of ten of them will disappear somehow of their own accord.  For the others poke about in your flesh with a sharp needle, (preferably sterilised in the flame of a match) until the thorn comes out.  Otherwise apply Germolene and cover with a plaster.   [In the Grimshaw family Germolene is alleged to cure everything.]

You can use your berries to make blackberry jelly or pies, muffins etc.

You will enjoy them all the more knowing the fruit did not cost you a penny.

One last word of warning, NEVER pick any after 1st October because the devil will have had them after that date!"