Until a couple of days the only time I had come across the term 'moated grange' was in Tennyson's gloomy poem Mariana in the Moated Grange with its air of desolation and horticultural neglect:

With blackest moss the flower-plots,
Were thickly crusted...

Now I've actually been to a moated grange. Birtsmorton Court, between Tewkesbury and Ledbury in Worcestershire, home of Nigel and Rosalie Dawes, is one of the few surviving moated manor houses or granges in private hands. Much of it dates from the Fifteenth Century, though parts of it are older, and there was a sympathetic rebuild in the 1930s following a fire a hundred years previously. In consequence it is an architectural delight and the major rooms remain in regular use as a wedding venue, as well as being part of the family home. There are also connections with Cardinal Wolsey and he is said to have sat under a fine Yew in the garden. 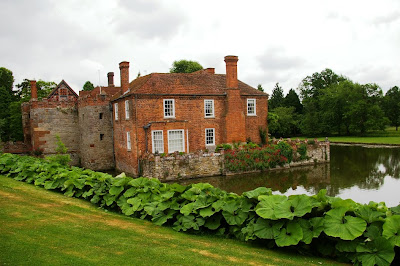 The moat, or moats, as there is an adjacent smaller moated plot where livestock would have been kept, and the huge Westminster pool, said to be the same dimensions as the nave of Westminster Abbey and dating to about the same period, complete the impression of a mediaeval landscape in which little has changed over the centuries. Interestingly these three water bodies are at different levels, so the water moves between them - in fact they form part of the stream that feeds into the Severn near Tewkesbury. The house is raised well above the water level and has never flooded.

The house is surrounded by the moats and mown lawns with fine specimen trees (and many more recent plantings). Beyond these are a series of immaculately kept garden rooms, largely concealed by clipped yew topiary and hedges. The potager and white garden were both designed by Veronica Cross; the white garden is superb, mixing white flowers with plenty of pale and, importantly, green foliage and highlighted by some charming statuary and lead water tank. In the adjacent potager Veronica used an ingenious combination of Pyrus salicifolia, Vitis vinifera 'Purpurea' and Clematis viticella to clad the central pergola, with pleached whitebeams behind. The Long Border, currently displaying peonies and bearded iris, guides the eye down to a gate fashioned in the shape of an angel, through which the lush Worcestershire countryside is visible. 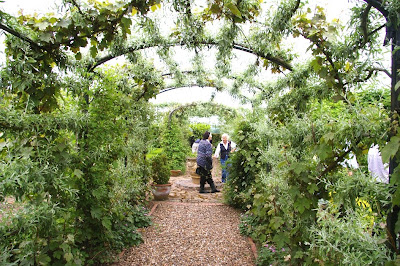 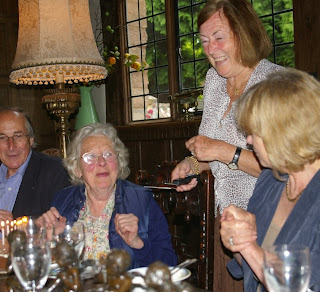 The occasion for the visit was a lunch of gardeners hosted by Rosalie to celebrate the recent eightieth birthday of Juliet Berkeley, a very popular character in local gardening and galanthophile circles. Her own garden is in the walled garden of Spetchley Park, just outside Worcester, where her brother John has continued to develop the very fine garden of their ancestral home.

Birtsmorton Court (see http://www.birtsmortoncourt.com/ for more information) is open for the National Gardens Scheme this Sunday, 13 June - see the Yellow Book for details. It is well worth a visit.
Posted by John Grimshaw at 17:59