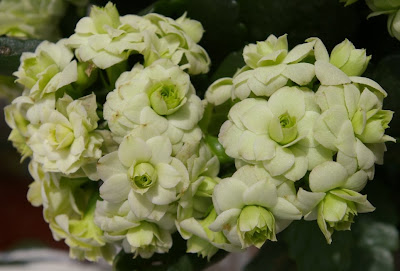 Visiting a garden centre during our visit to Holland in March I spotted a Kalanchoe with double green flowers, so added it to the trolley. The decorative wrapping around the pot informed me it was from the Queen Series of Kalanchoe, developed by the Danish company Knud Jepsen A/S, and from their website http://www.queen.dk/ it was possible to identify this clone as 'Paris'. It developed into a very attractive plant, with neat green flowers, as seen above (photographed 11 April). 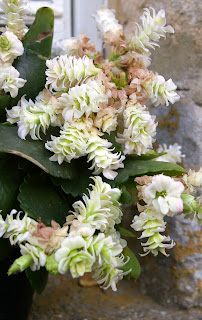 The flowers did not fade away in the usual fashion, however, instead developing a central axis that unfurled rank after rank of petals, eventually forming quite long 'tails'. In some of them I have counted 12 whorls of petals, and those that have developed most fully are now showing good reproductive parts at their very centre, demonstrating that this proliferation is taking place behind the growing point of the flower axis - an extreme case of the hose-in-hose flower type. The plant has by now lost any pretence at beauty, so has been deposed from the study windowsill and will be kept in the greenhouse from now on, to be watched for future developments. Today's photograph is to the right.
Posted by John Grimshaw at 19:54