The garden remains ablaze with colour, in fact it is as colourful now as at any time during the year, but the majority of it comes from composites of one sort or another, but especially the blue, purple and pinks of  Michaelmas daisies. Now reclassified, no doubt unpalatably to many, as Symphyotrichum from Aster, the English name remains constant for this very recognisable group. We are now a long way past Michaelmas and it is my impression that they are curiously late this year, but the display at this season is very welcome. Here is a selection flowering in the garden within the past few days.


For many gardeners 'Edinburgh' means the Royal Botanic Garden Edinburgh  and a visit there is always eagerly anticipated. Covering 70 acres it is not a vast site, but it is well laid-out and never feels cramped, while the horticulture is carried out to the highest standards. Growing a different range of plants, or growing them differently, to gardens south of the border, it is always inspirational, especially in the great rock and woodland garden areas where so many choice plants flourish. Indoors, academic botany also flourishes, and linking gardening and botany is a vigorous education programme for students of all ages.

We started our day at 'the Botanics' with a committee meeting, and members of the Woody Plant Committee then gave a series of short talks at a public session in the newly (and beautifully) renovated lecture theatre. Milling about before and afterwards gave a nice opportunity to catch up with several Scottish friends, seen only too seldom. After lunch we finally got outside, on a tour led by David Knott, the Curator, though trying to keep WPC members together in a garden full of interesting plants is really a bit hopeless. Many trees were lost or badly damaged in a storm in January 2012, and, as is the way with such things, the scars were pointed out almost as a badge of honour. The scarring is most evident in the collection's keepers, however, for whom it was a very traumatic event. But as with all such episodes, space is created for new plantings and opportunities, and the majority of trees survived unaffected. Many thanks to all who made it such an enjoyable visit.

The RHS Woody Plant Committee met in Edinburgh yesterday and around this a tour of Scottish gardens had been arranged for members. Unfortunately I could only spare two days, so on Tuesday I joined the others at Dawyck Botanic Garden near Peebles in the Scottish Borders. There we were given an excellent tour by Tom Gifford, Garden Supervisor, who took us all round the 65 acre site.

Dawyck is of exceptional interest, having had good trees planted there for about four hundred years, from the Veitch family in the 1600s, to the Naesmyths from 1691 and the Balfours from 1897 to 1978, when the garden was passed to the care of the Royal Botanic Garden Edinburgh, of which it now forms one of the satellite sites. A giant Abies alba survives from the 1690s in the garden, and there are more nearby, but the garden is a classic reflection of the 19th Century interest in conifers and the trees chart the early introductions. Most noteworthy, perhaps, are numerous huge Douglas Firs, Pseudotsuga menziesii, grown from David Douglas's own collections in the 1820s. The tall Sequoiadendron at the foot of the garden are also 'originals' grown from  seed sent back to Britain in the 1850s, and there are fine old specimens of many other, rarer species. Into this collection the Royal Botanic Garden has interpolated many recent accessions of both conifers and broad-leaved trees, with Sorbus and Betula being particularly conspicuous at this season. As it is an extremely cold site anything growing there has to be fully hardy.


The most famous tree at Dawyck, now replicated in thousands of gardens, is the eponymous fastigiate Beech. The original still grows in the grounds of Dawyck House, which are private and not part of the botanic garden, but it can be approached quite closely. It was found in a wood on the estate and transplanted to this site in the mid-19th Century, though not propagated or named until the early 1900s. In 1912 the tree stood 14.m tall when measured by H.J. Elwes: the Tree Register of the British Isles now records it as nearly twice as tall, at 27 m in 2010, but it has retained its unique shape very well. 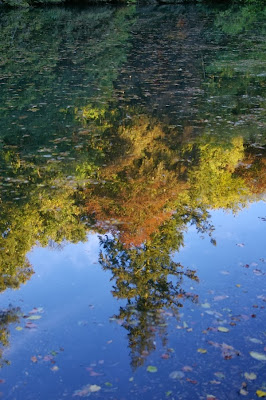 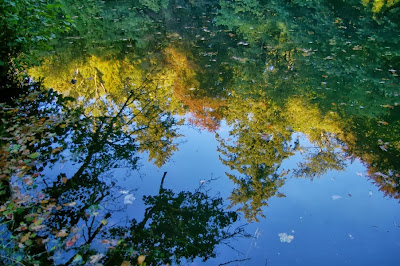 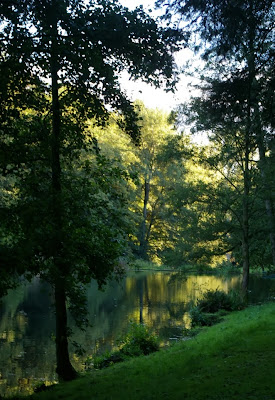 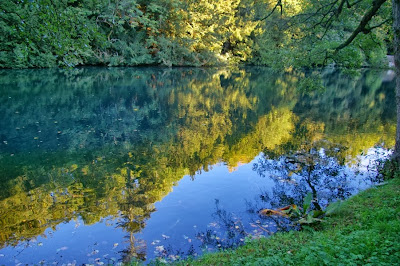 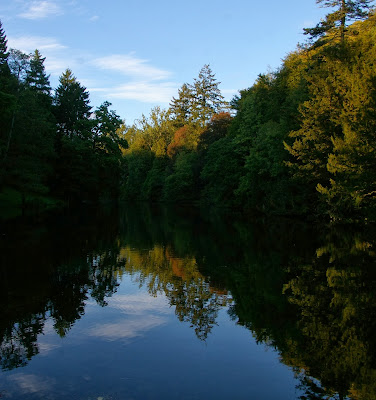 I was back at Colesbourne last Friday to lead an International Dendrology Society Study Day and late in the afternoon had the fortune to catch the lake at its reflective best - images above. No comment needed, I think. Below are a few scenes from elsewhere in the garden. 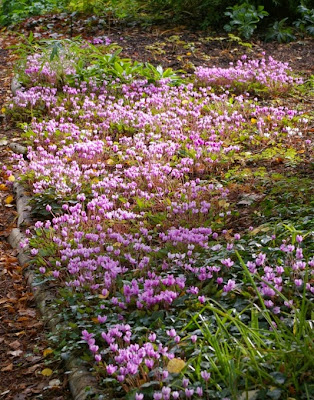