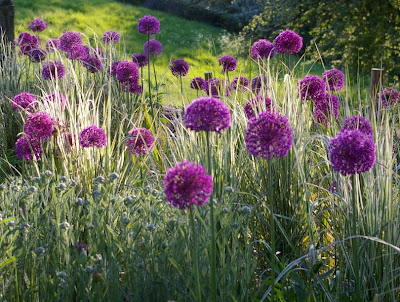 For the past ten days or so I have been enjoying the display of Allium hollandicum 'Purple Sensation' in the gravel bed, following on from the tulips and, like them, looking lovely with Calamagrostis 'Overdam'. It's a very tempting combination to photograph, especially as the sun lowers in the evening. Here is a selection of images. 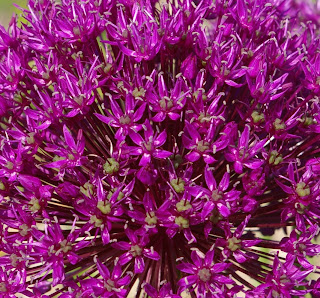 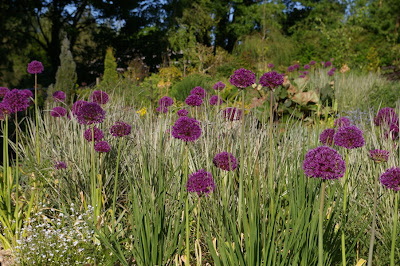 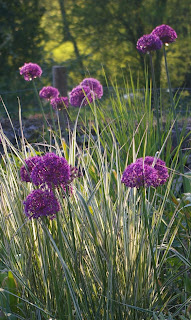 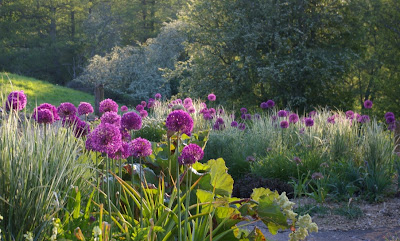 In 1927, the first year of the National Gardens Scheme, Colonel HC Elwes opened the grounds of Colesbourne Park to the public. To commemorate this 85th anniversary we were asked if would open again this year for NGS. We agreed to open on May 27th, though never having opened  in May before we did not really know how many visitors we could expect. In the event we hosted about 130 visitors on a lovely warm day, when the garden was looking lovely - there was certainly no problem about the 45 minutes of interest NGS gardens are supposed to provide! Here are a few of the plants and views on show today.


The Friends of the Oxford Botanic Garden Plant Sale will be held at the Harcourt Arboretum, Nuneham Courteney, OX44 9PX, on Sunday from 11 a.m to 4 pm - free entry. This biennial event is noted for the keennness of the buyers and the diversity of plants on offer.

For the first time the Oxford & District Alpine Garden Society Group has its own stall, promoting both ourselves and the sorts of plants we grow, though all proceeds go to the Friends as part of their fund-raising effort. I've been busy growing plants for the sale since last autumn and a consignment has gone off today - I'll take the rest myself on Saturday. Preparing a nice diversity of material that would be looking good in late May has been an interesting challenge. Among the things I've grown I'd highlight Dactylorhiza ×grandis, Hosta yingeri and Primula 'Ann Smith', while Saxifraga 'Wallacei', with a pedigree back to Reginald Farrer's Clapham Nursery, is something of a historic plant.  I know that other members are providing good plants too, so I think there are sufficient things there to tempt anyone with an interest in good plants. Unfortunately I can't go myself, as the garden at Colesbourne Park is also open that day - but I'm looking forward to hearing how it goes.


Although we voted for the RHS Chelsea Flower Show Plant of the Year yesterday afternoon the result is under embargo until 8 am today - but I have been bursting to be able to post the news that Digitalis Illumination Pink from Thompson & Morgan is the winner. It is a cross between what was Isoplexis canariensis (now Digitalis canariensis) and another Digitalis species, made by  Charles Valin, plantbreeder for T&M. As a student he worked with me at Sahin for a summer, so it's a real pleasure to congratulate him on a beautiful plant and this award. Unlike the other 19 entries it is a real novelty, showing imaginative breeding work resulting in something very distinct.


For the past couple of weeks I have been immersed in writing a massive article, but on Thursday evening I escaped and joined the Oxford & District AGS Group for a visit to the Old Rectory, Farnborough. Located in a small village perched high on the Berkshire Downs and surounded by rolling farmland it has a wonderful setting. The Old Rectory itself dates to about 1749, and has been owned for the past forty-some years by our hosts Caroline and Michael Todhunter, who in that have time have created a truly splendid garden, full of interest. Caroline is one of the best sorts of compulsive gardeners and together with her fulltime gardener Dan, and a part-time help, keeps the largish plot in immaculate order. Unfortunately it was a chilly, gloomy evening, so the photographs aren't scintillating, but they give an idea of the diversity of the planting and garden areas found here. It is very well-worth visiting.

My diictionary gives the second definition of  'déjà vu' as 'something tediously familiar'. There is indeed something very tediously familiar about the late frosts we get here, though the frost last year that wrecked Astilboides tabularis came on 4 May, not 16 May. The season was further advanced last year, though, and more damage was done - but last night's -2o C has nipped quite enough fern fronds, new Impatiens shoots, etc, to be very regrettable. I just hope it's the last of the season.

Things I didn't buy at the Malvern Show

How pleasant to know Mr Lear!


Today's Google doodle, as so often a reminder of obscure anniversaries, commemorates the 200th anniversary of the birth of Edward Lear - a fascinating, complex and I think rather sad character. Though a brilliant ornithological and topographical artist, he is best known today for his 'nonsense' humour, particularly the old person limericks but also the immortal characters of the Quangle-Wangle, the Dong with the Luminous Nose and the Owl and the Pussycat. They were very much present in my childhood and certainly helped form my pleasure in the absurd, but the most influential of Lear's works on my life has been the Nonsense Botany. This is a series of drawings of almost plausible plants with 'flowers' made up of little figures or domestic objects: they are bizarre creations, but not so very far off from the curiosities of the plant kingdom: numerous orchids fit the bill, and Pollybirdia singularis has considerable similarity to Erica cerinthoides. The drawings are prefaced with the following text, wonderfully parodic of the style of the Victorian botanist - but still encapsulating the excitement of plant-hunting in wild places:

"Our readers will be interested in the following communications from our valued and learned contributor, Professor BOSH, whose labours in the fields of Botanical Science are so well known to all the world. We are happy to be able, through Dr. Bosh's kindness, to present our readers with illustrations of his discoveries. All the new Flowers are found in the Valley of Verrikwier, near the Lake of Oddgrow, and on the summit of the Hill Orfeltugg.
Extract from the Nonsense Gazette"

A damp day in Oxford


A visitor from the Morris Arboretum in Philadelphia, Breck Miller, provided the excuse and opportunity to visit Oxford today. Unfortunately it rained for most of the day, at varying intensity, but we toured the Harcourt Arboretum with its Curator Ben Jones this morning, seeing all the exciting new developments he has planned; warmed up with a curry lunch at Worcester College with its Head Gardener Simon Bagnall, and then toured the Worcester College garden, the Oxford Botanic Garden and Magdalen College in his company. Not ideal conditions for photography, but here are a few things that caught my eye.