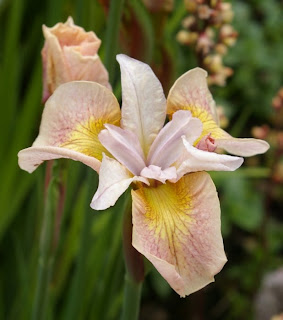 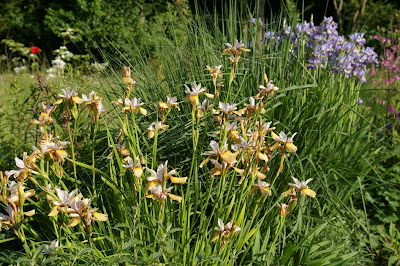 Without trying for the effect, for a couple of weeks in early summer the garden seems to be dominated by irises of several kinds - 'Dutch', damp-growers, and sibiricas - curiously there are no tall beardeds at all, an oversight to be rectified.

Among them I am particularly interested in some sibiricas grown from seed several years ago. Their parentage is now lost, unfortunately, but the seed-parents were all named clones. Of the hundreds of seedlings raised, most of which are now planted on the dam at Colesbourne Park, only half a dozen or so were worth selecting for further observation. Portions of each were planted in the garden here and now, fully established after three years, they are giving a fine show.

The most vigorous are those I refer to as "floriferous pastel" and "tall blue". The colour of the first is difficult to describe - a buff-yellow with some pink: certainly unusual and perhaps not to everyone's taste. The stems are widely spaced in the clump, giving it a relaxed elegance. In "tall blue" they are very stiff and straight, and also extremely freely produced, resulting in a solid mass of flower. 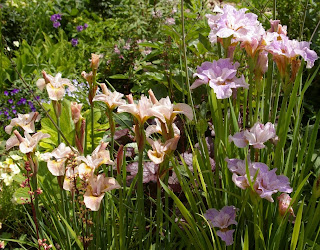 Unfortunately two with unusual colouring are much less vigorous - "frilly pink" and "peachy" - but they look well together surrounded by Heuchera and other pastel flowers and foliage.

Then there are two yellows. The most attractive, a 'self' yellow is not flowering well this year, which is not a good sign, but "bicolor yellow" is doing well. What an Iris afficionado would think of any of these selections I do not know, but I like them! 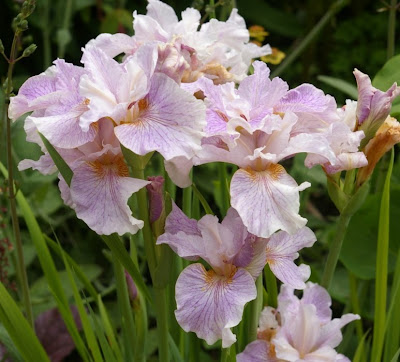 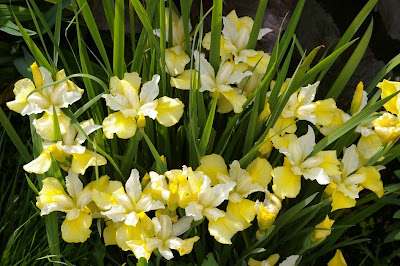