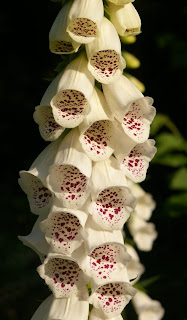 We are currently enjoying a lovely display of Foxgloves (Digitalis purpurea) of various forms and colours: despite being supposed to dislike alkaline soil they do very well in the gardens here. As a wild species Digitalis purpurea has tall narrow inflorescences just one or two flowers wide, usually in the typical purplish pink, but often with white or paler pinks among them, and with a degree of variation in the intensity of spotting. In our back border we have a group of this wild type, in various colours, that have germinated from seed in the soil. Among them is this one, with nicely spotted white flowers.

Inevitably with such a lovely and popular flower, gardeners have long been selecting different colours and inflorescence forms. Older cultivars such as 'Sutton's Apricot' and the soft yellow 'Sutton's Primrose' (right), typically have bells only on one side of the inflorescence, though generally have more flowers than the average wildling. These colours are now available in other cultivars as well, but I do like the simplicity of the one-sided spike. Selection in inflorescence shape has usually been for more flowers, especially to encircle the stem, as in the old Excelsior Group, the more recent Camelot Series and the shorter Foxy Group.  In all these the bells hang down or outwards. 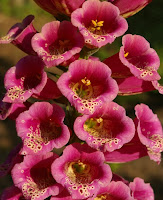 Last year the cultivar 'Candy Mountain', with upward-facing flowers was released at the Chelsea Flower Show for the first time. It has been developed by the Dutch seed company  K. Sahin, Zaden B.V. (for whom I used to work) from originals with an upwards tendency, but a great deal of hard selection work has gone into it, mostly by Maarten van der Sar. The result is an extremely uniform cultivar with thick spikes that are very imposing. With all foxgloves careful selection in isolation from others is needed to produce seed that is true to type, as they are all interfertile and the bees soon muddle the genes very effectively. There are ways of keeping pure cultivars among a garden of mongrels, though: collect seed only from the lowest flowers, if they opened before the others, or remove the undesirables after their main show is over and collect seed from the later-flowering side-branches of your selection. 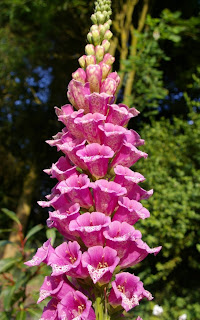 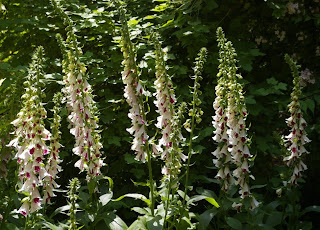 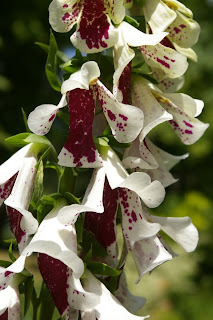 Another release from Sahin at Chelsea last year was 'Pam's Split' - an unfortunate name perhaps, but a lovely plant. It combines the dark purple throat and white flowers of the cultivar 'Pam's Choice' with a split corolla, as found in the cultivars 'Saltwood Summer' and 'Anna Radetzky', which have been around for a few years now, and the 2010 introduction from Hilliers, 'Serendipity'. I can claim some credit for 'Pam's Split', as I made the first cross from which Maarten later developed the true-breeding cultivar.The dark lip makes it much more dramatic than the other split-corolla cultivars, I think. Although 'Saltwood Summer' was proclaimed as the first such Foxglove, this mutation has been known since the Nineteenth Century at least. However, it has never been as common as the rather frequently seen peloric mutation in which an enlarged, rounded flower develops at the top of the stem and opens before or with the first flowers - it often causes people to send pictures in to the advice columns of the horticultural press, with a query to the effect of 'what's going on here?'
The plant illustrated below is a peloric form of Digitalis purpurea subsp. heywoodii (which is distinguished by its white-hairy leaves and pale flowers). This clone has been maintained by cuttings for many years, but the typical peloric D. purpurea comes true from seed if isolated. 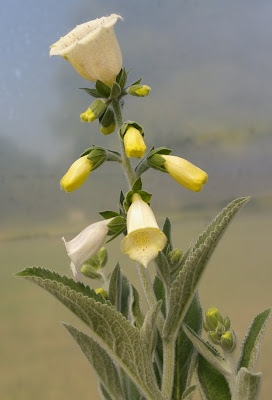 Lastly and leastly is a picture sent to me by Matt Bishop of a Foxglove growing at the Garden House, in which the flowers are reduced to minimal nubs. It is not showy.
Posted by John Grimshaw at 23:02