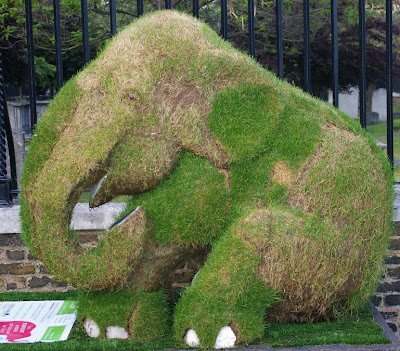 For the last few weeks the streets and open spaces of London have been decorated by a 'herd' of decorated elephant models, bringing a great deal of charm and pleasure to a lot of people. They're there to highlight the plight of the Asian Elephant, whose habitat is fast disappearing, bringing them increasingly into conflict with people (not to mention the resurgent demand for ivory in China). The display has been organized by Elephant Family, a charity devoted to Asian Elephant conservation, especially through the establishment of corridors between areas of elephant habitat. Having been deeply involved with establishing a protected elephant migration corridor myself in Tanzania I understand the urgency and relevancy of this approach. 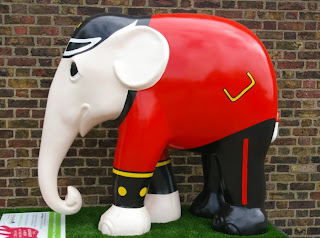 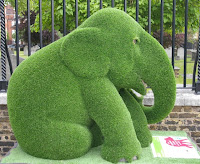 The Elephant Parade is now in its last few days, and the whole herd is being gathered together for viewing at the Royal Hospital, Chelsea on 25, 26, and 28th June, with a show for a few indoor-only models elsewhere. More info about this and the project is available at http://www.elephantparadelondon.org/index.html
The elephants will be auctioned to benefit the work of Elephant Family on 3rd July - I imagine the bidding will be brisk, as these are really fun items. The pictures show three elephants that have been displayed at the Royal Hospital already: the turf version, which I think has a wonderful look in its eye, was there for the Chelsea Flower Show, but has since been replaced by an astroturf model (right).
Posted by John Grimshaw at 07:57