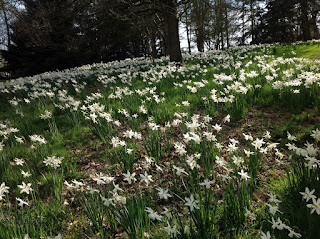 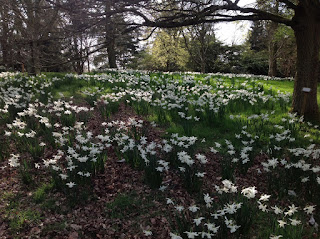 On Saturday Alastair and I went to Cherry Tree Arboretum on the Shropshire/Cheshire border near Woore. This is the private collection of John and Elizabeth Ravenscroft, former proprietors of Bridgemere Garden World, and has been planted across the 50 acre site over the past twelve years or so. Despite this youth it is one of the most interesting collections of trees in the country, concentrating on good ornamentals, especially Magnolia and other flowering trees in spring, and those with good autumn colour later. The magnolias and cherries stole the show on an exceptionally warm and beautiful spring day, but there was a great deal to see and enjoy beyond these, not least the beauty of the site, with collection blending into the countryside of old hedges and field trees.

Cherry Tree Arboretum is more than just a retirement hobby, as there is a very active nursery on the site, producing large numbers of beautifully grown young trees. The primary focus is on really good magnolias, but again they produce a wide assortment of unusual trees, most of which are seldom grown by other nurseries. The aim is for the nursery to bear the costs of running the collection and hopefully to be able to do so long term. Sales are wholesale only, though we were recently able to acquire a selection for the Yorkshire Arboretum, and the arboretum isn't open to the public, so we're very grateful to the Ravenscrofts for a chance to see it.

Lembris Kephas Mollel, who died on Wednesday, was one of my field assistants when I was working on Kilimanjaro, Tanzania, between 1990 and 1994, and was someone I am very happy to be able to have called a friend.

A member of the Waarusha tribe, Lembris lived all his life in the small dusty village of Lerang'wa on the northwestern corner of Kilimanjaro, occupying a small homestead of traditional round huts and cultivating a few acres of maize and beans when the seasons permitted. When Charles Foley and I arrived to undertake a census of the Kilimanjaro elephants in 1990 he was one of the young men of the village to work for us as a porter on our lengthy transects through the forest, and on my return in 1992 he became one of my field assistants alongside Mtapa Abdallah and Obedi Daniel. In this capacity he helped carry the kit, set out quadrats, make camp and cook - we spent many nights huddled round a campfire together, eating an unappetizing meal of ugali and fried cabbage. He and Mtapa were with me on the occasion we walked unawares into a pride of lions and had to take evasive action into the (fortunately) giant heather trees (Erica excelsa). On another occasion he was deputed to take my parents for a walk in the forest; they came across some buffalo dung and my mother asked 'Where are buffalo now, Lembris?'  He said 'oh, far away' - at which point, inevitably, two buffalo burst from cover and dashed off in the other direction (also fortunately).

In addition to his help 'outside' Lembris also assisted Obedi in drying and managing my herbarium specimens, even mounting many of them onto cards, some of which are still to be found in the herbarium at Kew, and contributed to my ethnobotanical records of the uses of forest species. It was Lembris and Mtapa who guide me to the only known small stand of bamboo on Kilimanjaro (now Oldeania alpina,  which uses the Maasai word for bamboo, oldeani, to form the generic name) and, on my last day of the fieldwork, to the tree that was to give the clue to my thesis. This was a huge Juniperus procera, standing alone in broad-leaved forest; since it requires open bare ground to germinate and establish it was evident that the vegetation in that spot, far from being immutable climax forest, had been bare hillside about three hundred years previously.


After I left Tanzania we kept in touch and Lembris became a village game scout, largely trying to keep wild animals away from the crops. On one occasion he called me to let me hear the noise of a herd of elephants in a maize field - I couldn't actually hear it, but it was a lovely thought. Later he became the leader of an anti-poaching team based on West Kilimanjaro, funded by the Big Life Foundation, and head of the tracker dog team deployed to follow up poachers. He achieved a modicum of fame through this, and images and accounts are to be found on various websites.


Inevitably we did not meet very often, but in 1997 Lembris helped porter for an Alpine Garden Society expedition to Kilimanjaro, and I would see him on the occasions I was able to visit Lerang'wa over the years. In 2009 I was presented with a sheep - as an elder I needed a flock - which was promptly turned over to Lembris's care. She bore a pair of twin lambs, but unfortunately they were all taken by a leopard.

In 2014 while on patrol Lembris collapsed and was taken to the Aga Khan Hospital in Arusha, where a brain tumour was diagnosed. He was taken from there to the sister Aga Khan Hospital in Nairobi, one of the best in East Africa. The operation (funded by Big Life Foundation) to remove the tumour was successful but the damage was done and he never regained his full faculties. 25 years ago communicating with Lerang'wa was difficult and slow, but the sad news came by Facebook message the same day he died, and many Tanzanians have posted their tributes to him on friends' pages. He leaves his wife Anna, and their children Eliudi, Shedrack, Naomi, Meshak, Abednego, Elirha and Elia, to whom I send my deep sympathies.

A deeply religious man, and self-styled Mtoto wa Jesu, I can think of no better words to commemorate him with than the Epitaph from Gray's Elegy, though many other lines also apply:


Here rests his head upon the lap of Earth
A youth to Fortune and to Fame unknown.
Fair Science frown'd not on his humble birth,
And Melancholy mark'd him for her own.
Large was his bounty, and his soul sincere,
Heav'n did a recompense as largely send:
He gave to Mis'ry all he had, a tear,
He gain'd from Heav'n ('twas all he wish'd) a friend.
No farther seek his merits to disclose,
Or draw his frailties from their dread abode,
(There they alike in trembling hope repose)
The bosom of his Father and his God.