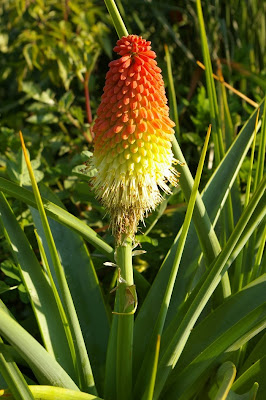 Kniphofia northiae is the largest and chunkiest of the genus, producing  long broad leaves that, when the plant is out of flower, suggest a bromeliad rather than a red-hot poker. The inflorescence is never very elegant - a  broad club rather a poker, and I think the plant's garden value lies mostly in its foliage effect. In the Drakensberg it grows in damp places along streams and seeps, flowering early in the season and thereby apparently avoiding the possibility of hybridizing with other species. In the garden it is happy in ordinary soil, but over the years I have lost a number of plants in the winter here. 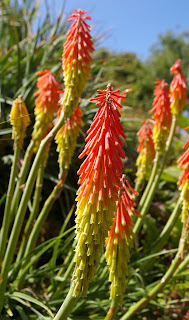 Altogether smaller, in fact one of the shortest red-hot pokers, is Kniphofia hirsuta. It also has the distinction of being the only poker with hairy foliage. I have seen this only in the northern Eastern Cape around Naude's Nek and at Tiffindell Ski Resort, where it grows on the slopes of Ben MacDhui, the highest point in the Eastern Cape Province. It is perfectly hardy here and flowers reliably in June. The form usually seen in cultivation, often sold under the name 'Traffic Lights', is shorter and thicker in the spikes than this clone, which originated from seed collected on Ben MacDhui. This year it has escaped serious damage from slugs, which can browse on the buds as they emerge, wrecking the effect. It too seems to happy in ordinary soil - this plant is growing in a very arid stony bank - but I think it is important to ensure that nothing is allowed to grow over and smother the foliage.
Posted by John Grimshaw at 09:24