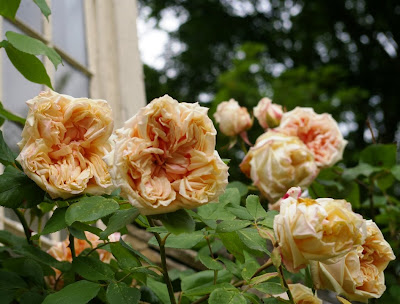 When I moved into this cottage six years ago I was delighted to find that trained over the door was one of my favourite roses, 'Gloire de Dijon'. It is planted in the gap between the wall and the brick path, facing south - everyone always says it should be on a north-facing wall - but despite these conditions it produces a lavish crop of flowers about this time each year. then it will lose most of its leaves to black spot, reflush, and go on flowering until the late autumn. There are undoubtedly many other roses I could grow to look better throughout the season, but 'Gloire de Dijon' is one of the archetypal cottage garden flowers, and I'm delighted to have it. 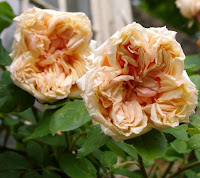 In my first book The Gardener's Atlas (available from any internet bookshop for next to nothing), I wrote that it was one of the first yellow hybrid roses, but this was queried by the designer who saw the photograph used as pink. Yellow, in the sense we might think of a yellow rose of today, it is not, but in 1853 when it was introduced by the French nurseryman Jacotot, it was the yellowest thing yet seen. Graham Stuart Thomas called it 'deep buff-yellow... suffused in warm weather with pink and apricot', but it does shift its colour subtly according to both the weather and the flower's age. My mother always says it reminds her of the Queen Mother's complexion. I enjoy its irregular 'quartering' and its rich scent, combining with the colour to give that inescapable antiquarian look.
GST in Climbing Roses Old and New goes on to say 'It is rather leggy in growth, but this can be cured by planting with it a small-growing clematis...' The bare 'legs' of the plant here are certainly not its best feature, but instead of a Clematis I planted a curious honeysuckle to try to clad them in some decency. This is Lonicera subaequalis, collected by Mikinori Ogisu in Sichuan under his number Ogisu 93.329 (available from Pan-Global Plants). It produces its yellow, slightly scented flowers from between large boat-shaped (navicular is the technical term) bracts, from also rather leggy stems with not much leaf. I think it would prefer a less strenuous spot, in better and damper soil, but it survives and flowers well every year. 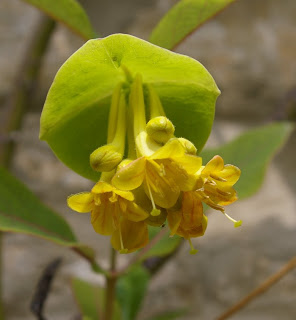