A dry, warm and (latterly at least) sunny day at last, making a very welcome change from the incessant rain and gloom of the last week. Coming home from the garden this afternoon I found the gravel bed  glowing with half-opened tulips in two cultivars, 'Spring Green' and 'Yellow Spring Green'. With nothing else flowering in the bed, and accompanied only by the new growth on grasses and alliums, this simple combination is extremely effective - though as always, one wonders why one didn't plant twice as many bulbs.

We need the rain

Since the hosepipe ban came into force at the begining of the month, it has tipped down most days in a way that seriously tests the temper of even a dedicated pluviophile. Chaucer could not have called these April showers 'sweet' - many have been mixed with vicious hail - but they have certainly done away with the drought of March. We received 27.5 mm of rain in March, and by this morning the April figure was at 126 mm. The underlying drought, we are told, will not be seriously alleviated by the current wet spell, but its horticultural effects are being staved-off for a while, at least, and one can again feel relaxed about planting things out. The soil, however, is wet, but not warm; April has been distinctly chilly and many flowers have remained fresh for far longer than would have been expected during the warm weather in March. Others, however have been wrecked, especially the tulips, many of whose flowers are sodden wrecks and whose leaves have been pockmarked by hail and then blasted by 'tulip fire'. The cool wet spell is forecast to continue well into next month, with a specially foul day predicted for Sunday. 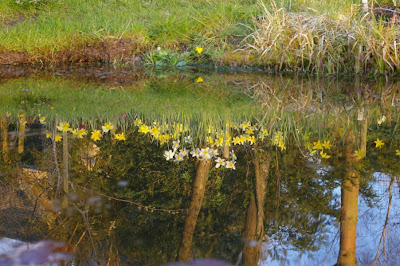 Vision and views at The Garden House


It seems incredible that in the almost two-and-a half years that I've been writing this diary I have not had the chance to visit The Garden House in Buckland Monachorum, Devon, widely regarded as one of the most beautiful and inspirational gardens in the country. It's all the more extraordinary given that Matt Bishop, the Head Gardener there, is one of my closest friends and colleagues, but we made up the deficit with a delightful visit over the weekend.

The Garden House garden was started by Lionel and Katharine Fortescue in the 1940s,  and quickly became renowned as a site of horticultural pilgrimage. Their plantings seem to have been confined to the area around the house (the former vicarage) and the walled garden with its medieval buildings and walls below it, but they established the tradition of fine plantsmanship and strong design that defines the Garden House to this day. To secure the future of the garden they established the Fortescue Garden Trust in 1961, vesting ownership in a body of trustees. The Fortescues appointed Keith Wiley as Head Gardener in 1978, a position he occupied until 2003, when he left to establish his own Wildside garden and nursery a little lower down the valley, and was succeeded by Matt Bishop.

The garden is full of good plants and was looking beautiful because of them, but the real strength of The Garden House is in its wealth of design features, and the vistas that open up as one moves around the garden: judicious thining in recent years has clarified or re-opened some of these, and their impact was particularly apparent on this visit. This post celebrates some of these vistas, created and developed by three great gardeners.


A few pictures from Colesbourne Park this afternoon.

A day at Kelmarsh Hall

I've spent most of the day at the Heritage Gardens Event at Kelmarsh Hall, Northamptonshire, an occasion that forms part of the RHS-led National Gardening week. My function was to be part of an RHS Panel of Experts, but as very few of the visitors seemed to need our advice, I had ample opportunity to look round the gardens adjacent to the beautiful house, built of richly-coloured local brick in the 1730s. In the Twentieth Century it was home to Nancy Lancaster, an arbiter and setter of country-house fashion in interiors and gardens and her influence is still visible in the garden. The property is now owned by a trust, which generates revenue by hosting a regular series of events, and Kelmarsh Hall is also a RHS Partner Garden, enabling free access to RHS members at certain times.

Evening light in the cottage garden.


Chris Lane may be best known for his knowledge of and collection of Hamamelis, but at his nursery in Kent he has gathered together collections of a wide range of woody genera, notably Wisteria, Syringa and Prunus. With great generosity he has made these available for assessment by the Royal Horticultural Society as an off-site trial for which resources would not otherwise be available. At present, with the cherries working through their flowering season, attention is focused on them and a panel of members of the RHS Woody Plant Committee is making weekly visits to assess them, principally for recommendation for the Award of Garden Merit. I joined the panel today, spending most of the day walkling up and down the rows of trees, considering each cultivar in turn. With about 230 distinct cultivars in the trial this takes a long time.The results and comments are collated over the three years of inspection, and awards will be decided at a meeting at the end of the trial period (this year) when all opinions are correlated and considered. So it is premature to make any announcements, but here are a few that I particularly liked.

I've been at the RHS Show in London today and have learnt a lot and seen a lot of plants, but the one plant that stood out in the show was an incredibly beautiful variegated Brassica, shown by the Botanic Nursery. It has broadly white-margined, crinkled leaves (I suppose it is some sort of kale). The two plants shown had bolted into flower, causing the leaves to be quite widely spaced up the stems, but the effect of the white and shades of grey-green was lovely. The flowers, fortunately, are creamy white, and although a bit gawky the flowering plants are not unattractive.

It is of French origin, and it bears the cultivar name  'Joseph Coterel', but it's being marketed as Crème Chantilly by Hortiflor-Bureau, who are currently selling it for €12. It has been given awards at Courson, from where the Botanic nursery acquired their plants. One has to wonder whether this plant can be maintained for very long in tissue-culture, or whether it will be a short-term wonder, but the foliage is certainly extremely beautiful: just keep the pigeons off it.

There are plenty of bores in horticulture, but this morning we chose to go to see another sort of bore - the surge-wave that dashes up the River Severn on about 60 days a year, when tide conditions are right. The Severn bore is the biggest in Britain, and one of the largest in the world, caused by the huge tidal range in the estuary and its rapid narrowing into a funnel, thus causing the water to rise rapidly and move upstream in a great fast surge. The biggest bores, which are rated with one to five stars, occur at the time of the Spring spring tides, which have occurred this weekend.

We chose to watch from the Severn Footpath near Weir Green, at a point where we had clear views down- and upstream. The tide tables published online suggested that the bore should arrive at about 10.45, but it was about ten minutes after this time that the first plume of spray was visible above the bank beyond the bend: then it became visible as a bulge in the water height, rather than as a peaked wave. The main visual effects came from the rush of water up the banks and the spray that it generated. The water moved at an  astonishing speed and behind it came the full tide, filing up the channel and bearing large rafts of debris upstream at a smart lick. Carried along with it too was a swan, which sailed by making small plaintive noises, though we later saw it had managed to get into slacker water by the bank.

﻿﻿Despite the grey wet day it was an amazing experience, and highly recommendable. Numerous websites give details, but this one is particularly helpful. The next three-star bore is due, conveniently, on 7 May, the next Bank Holiday, but will occur in the evening.

Along the riverbank were a number of the magnificent old fruit trees that the Severn valley is famous for, relicts of ancient orchards.  A group of enormous pear trees was particularly remarkable, but close inspection showed them all to be rotten through and through, though bearing healthy crowns. The sad thing is that there are no replacements whatsoever in these sites, so once the old trees go that will be it - a loss of beauty and agricultural heritage.