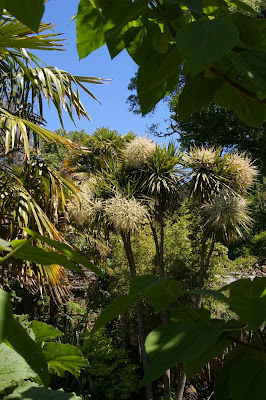 Yesterday the RHS Woody Plant Committee held one of its 'away-day' meetings at the Abbotsbury Subtropical Gardens on the Dorset coast, enjoying glorious weather. After business and lunch had been dealt with, we had a tour around the gardens led by the Curator, Stephen Griffiths, who is also one of the committee members.

The Abbotsbury gardens started off as a 19th Century walled kitchen garden for the 'Castle', a mansion built on an exposed site just above the sea as a summer residence for the Earl of Ilchester and his family, still the landowners today. This burnt down in the 1930s, but the gardens, which had been transformed into ornamental grounds, were retained. They had been planted in the Victorian 'subtropical' style, with lots of Trachycarpus and Cordyline and the name has stuck. The gardens have spread out through the woodland of the sheltered valley in which they lie and most of the 30 acre site could be regarded as classic woodland garden, albeit with an emphasis on the more spectacular sorts of plants. Although the Dorset coast is mostly formed of limestone (as indeed is most of the area around Abbotsbury) the gardens occupy a narrow patch of ironstone, giving them acidic conditions. Although the coastal location gives ameliorated conditions, it is not as mild as the gardens of Cornwall or even western Scotland, and this year -7 C was recorded. It did more damage than usual, but there was no evidence of serious losses. We were all surprised to learn that the average annual rainfall is only about 45 cm (20"). 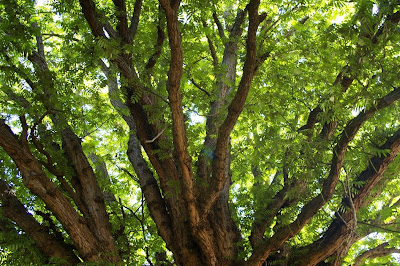 The multi-branched crown of Pterocarya fraxinifolia
The natural woodland includes some magnificent, extremely tall native oaks (Quercus robur), but there are also many large Holm Oaks (Q. ilex) providing shelter from wind and frost. Old trees within the garden include a very large Ailanthus altissima and two big specimens of Pterocarya fraxinifolia. Both species give a very lush effect with their large pinnate leaves, but the Wingnut just inside the gate can only be described as awe-inspiring, with a huge trunk and a wide, rounded crown., and gives a very tropical look.

Stephen Griffiths came to Abbotsbury in 1990, just after the January gale of that year had wrought havoc with mature trees and the shelter belt. The gardens were rather run-down anyway, so he has had the opportunity to develop them from a low ebb, tackling them section by section each year. The result is a very attractive garden, now containing a great collection of interesting plants. The self-sowing Trachycarpus fortunei provides some cohesion throughout, but is just one of about eight palm species growing happily. Butia capitata is the most successful of the pinnate-leaved species. Of particular interested is the hybrid xButyagrus nabonnandii, a cross between Butia capitata and Syagrus romanzoffiana (from a genus usually considered to be very tender), that is thriving and showed no signs of winter damage. There a lot of bamboos, some a spreading menace, but others like Chusquea gigantea are magnificent clump-formers. I was particularly pleased to see, at last, the best specimen of Alniphyllum fortunei (Styracaceae) in the country. Originally grown from seed by Roy Lancaster and presented by him to the garden, it is now about 8 m tall, and was in bloom - but only at its top, so the white flowers were hard to see. 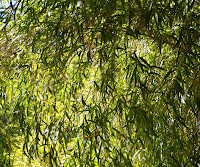 xButyagrus (left) and Chusquea gigantea
What may become to be seen as Stephen's greatest contribution to the garden is a broad walk cut through the woodland on the hillside rising above the garden. This has been planted with an avenue of Magnolia campbellii seedlings, with a backing of other, quicker-flowering magnolias, and leads to a viewpoint from which the panorama of Lyme Bay can be seen in its entirety. To the east is the parabola of Chesil Beach linking the Isle of Portland to the mainland with a chain of graduated gravel and cutting off a lagoon, the Fleet, from the sea. It is on this that the famous Abbotsbury swannery is located, and the birds can be seen in the photo. To the west the eye travels past the Golden Cap as far as Start Point in Devon - the first part now being known as the Jurassic Coast in recognition of its rocks' antiquity and their famous abundance of fossils - a wonderful sight in light of Mediterranean quality. 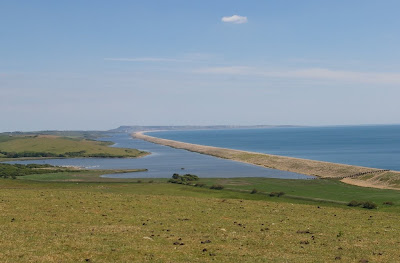 The view eastwards, along Chesil Beach to the Isle of Portland.
Posted by John Grimshaw at 22:05