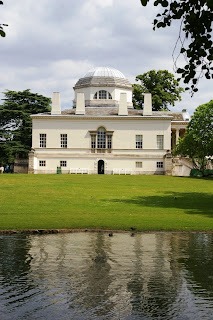 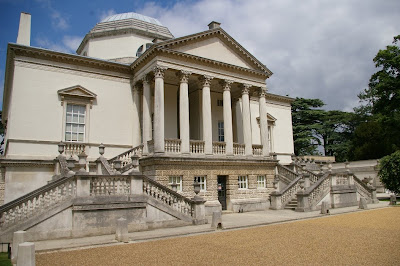 On our way to Pope's Grotto yesterday we visited two houses (and their parks) with which he was closely involved and which had huge influences on British architecture and landscape gardening. Alexander Pope's great patron and friend was Richard Boyle, third Earl of Burlington (1694–1753), the 'architect Earl'. As a young man on the 'Grand Tour' of Italy he discovered for himself the neoclassical works of Andrea Palladio (1508-80), collecting not only the Quattro Libri but original drawings, and becoming a highly skilled architect himself. A statue of Palladio commissioned by Burlington (right) still stands outside Chiswick House - on the further side is his other great hero of the classical revival, Inigo Jones. While encouraging the adoption of Palladian, neoclassical architecture by his fellow aristocrats, with the results to be seen in so many of England's stately homes, Burlington demonstrated his taste and skill on his own properties too. 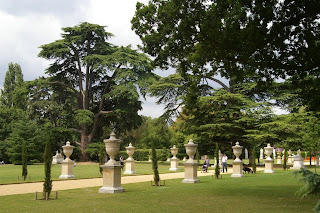 His greatest design is perhaps that for the villa now known as Chiswick House, but which originally formed an adjunct to the earlier, adjacent house of that name. This exquisite building still sits in its park, essentially as Burlington planned it (though a nineteenth century walled garden and fine conservatory, currently under restoration, have been intruded), but hemmed in between two of west London's main transport arteries that destroy the sense of rural idyll that must have prevailed in the 1720s. Pope was a regular visitor at Chiswick, and must have had a great influence on Burlington's thoughts on landscape, but even more important was his associate William Kent, who became the greatest of early landscape gardeners. Horace Walpole wrote of him 'He leaped the fence, and saw that all nature was a garden'. The garden at Chiswick House was originally rather formal in the classical fashion, and some of this survives- a patte d'oie of allees, and an avenue of urns and cypresses, for example, but Kent softened it round the edges, bringing romantic informality to the park. This is perhaps most evident in the irregular edges of the lake, originally a formal canal, still flowing from the cascade he built. 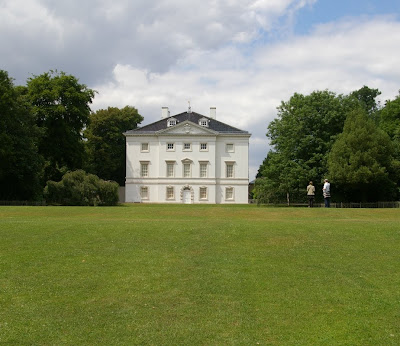 Marble Hill from the south, facing the Thames
A mile or so east of Pope's Villa at Twickenham is the perfect Palladian mansion, Marble Hill. It was built from 1724 for Henrietta Howard (1688-1767), with funds provided by George II, whose mistress she had been when Prince of Wales. It is not a particularly large house - certainly no grand stately home, but the perfectly proportioned residence of a lady of taste. It is set in wide parkland,  laid out by Pope and the landscape architect Charles Bridgeman, but its great significance is the aspect it presents to the river at the end of the lawn, ' giving the Thames an air of the River Brenta', according to Mavis Batey. It is at the heart of the so-called 'Arcadian Thames' landscape running from Richmond Hill to Hampton Court, which forms the first view in the world to be given legal protection (by Act of Parliament in 1902).

Inside the house is a series of elegant rooms; surrounding a pillared hall on the ground floor; around the gilt 'Great Room' on the first floor or piano nobile; while on the second floor a picture gallery runs the width of the building. The original furnishings were dispersed long ago, and the pictures were all sold in 1900. Despite this the house has been meticulously refurnished by English Heritage and some of the original paintings, especially the five capriccios painted by Giovanni Paolo Panini, from the Great Room, have been tracked down and bought back. Where the original paintings are not available, appropriate substitutes have been provided. Henrietta Howard was fond of chinoiserie, aparently much to the disgust of her friend the Earl of Burlington, and the house has been redecorated with this in mind. A recent restoration has been the hanging of the dining room in new, hand-painted chinoiserie-style wallpaper made for Marble Hill by de Gournay of Chelsea - a wonderful confection of exotic birds and flowers.

Both Chiswick House and Marble Hill are owned by English Heritage, and have limited opening hours (Chiswick House is not open on Saturdays!) - information is available on their websites. Their grounds are now public parks run by the local municipalities, and are evidently extremely popular. The surroundings of Chiswick House are undergoing restoration under the supervision of the Chiswick House and Gardens Trust, and several features are currently under wraps, but they should be magnificent when complete, once again complementing the architectural gem at their heart. 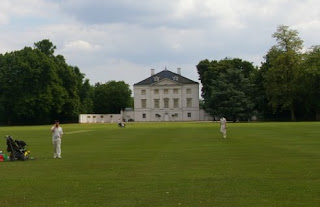 Marble Hill from the north
Posted by John Grimshaw at 21:48