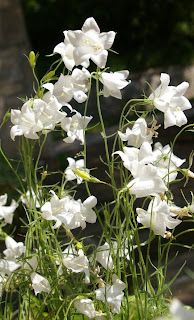 Today's post features a few plants currently looking good in the gardens of Colesbourne Park. Campanula 'Hilltop Snow' was raised by well-known alpine grower and nurseryman, Graham Nicholls, of Timsbury, near Bath. It is a very easy plant in a trough, forming a clump rather than running about, though the stems tend to flop outwards to give the plant a wider radius.

Lilium monadelphum has persisted in the grass near the Ice House since the days of H.J. Elwes, so has been there for at least 90 years. Interestingly, in his review for the current issue of The Plantsman of The Wild Garden: Expanded Edition by William Robinson and Rick Darke, James Hitchmough expresses incredulity at the possibility of naturalizing this species, assuming that slugs will always get it. They don't here, or in some other gardens where it has become thoroughly established. It is a native of the Caucasus, a relative of L. kesselringianum featured earlier in the month, but flowering very much later than that species. Like it, however, it has an unattractive scent.

Delphinium 'Loch Leven' is one of the classic blue show delphiniums, producing magnificent thick spikes. The delphiniums have really benefited from the dry and generally quiet weather all spring and early summer, avoiding the damage caused by slugs and wind. 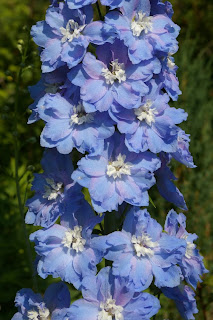 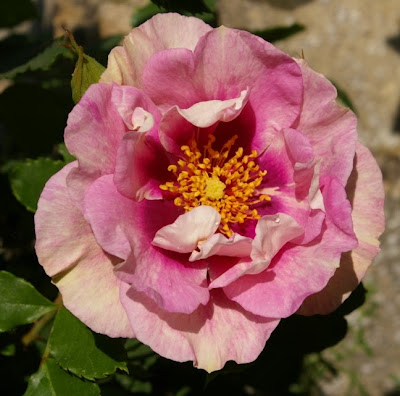 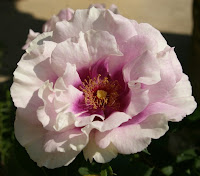 Rosa 'Pejbigeye' sold as Eyes for You, is one of a growing number of roses that incorporate genes from Rosa persica (formerly known as Hulthemia persica), typically visible in the dark blotch at the centre of the flower. In my youth the only hybrid of Rosa persica known was called xHulthemosa hardii, a funny little shrub that had a bad reputation for difficulty in cultivation. Hulthemia has now been recognized to be a true Rosa, so the hybrid name has disappeared. This selection was bred by Peter J. James and released last year. It is attractive, with the dark eye suggesting a Cistus, but in the current heat it is fading quickly (right). We're growing it for this year in a tub with a mixture of tender perennials around it, before finding it a permanent place in the garden. 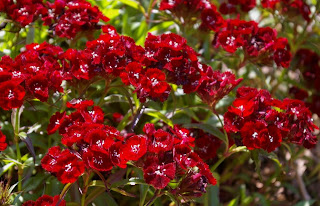 Dianthus barbatus 'Heart Attack' is a perennial Sweet William selected by my friend James Stevenson while he worked at Plant Delights Nursery in North Carolina. It was named with typical PDN bluntness - I  have known people who have refused to grow it because of the name, but they are missing out on a good plant.
Posted by John Grimshaw at 22:23