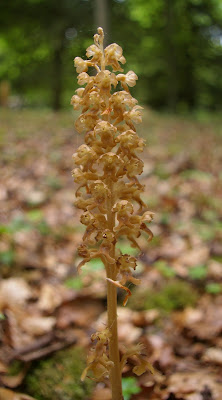 The Bird's-nest Orchid, Neottia nidus-avis, is a strange, brown plant entirely dependent on its fungal connections for sustenance- it has little or no chlorophyll and is thus unable to manufacture its own carbohydrates by photosynthesis. Both its English and scientific names refer to the tangled mass of short roots that look like an untidy bird's nest.
The species typically grows in dense shade, especially in mature Beech woods on calcareous soils, and plants can be quite difficult to see as the brown plant blends with the leaf litter. If illuminated by a shaft of light, however, the plants can be seen to be surprisingly handsome and often quite large (up to about 45 cm in height). There is an excellent population in one of the Colesbourne woods (below) where almost all ground vegetation is suppressed by the dense canopy above: of other woody plants only the Yew trees tolerate the low light levels. 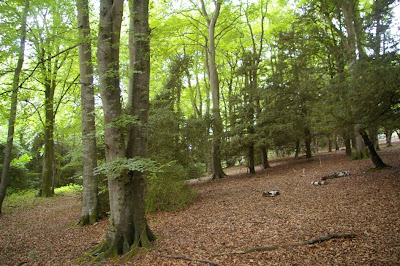