The end of an era


After precisely nine and a half years, today has been my last working day at Colesbourne Park. Inevitably, such an occasion involves a degree of sadness, having been so intimately associated with the place for so long and having built up the gardens and their reputation to their current standing. On the other hand, one can look back with pride and happiness at what has been achieved in that time, and at the enjoyment and fun involved in working in such a beautiful place - of which these are a few recent pictures.

Back in 2002 I took the step of asking Henry and Carolyn Elwes if they'd like me to come to Colesbourne to manage and develop the garden for them. They agreed, and the rest is history. I have to thank Henry and Carolyn for trusting me to do something with their garden, and for the excellent working relationship and friendship we have had during this time. Running a big garden as a part-timer with many other things to do is not particularly easy, and is indeed only possible with solid assistance. In this I have been fortunate to first have the assistance of John Thorn, who in his first year notoriously planted 55,000 bulbs almost single-handedly, and then Will Fletcher, who has been my righthand man for the past seven years. I thank them both for their support and hard work, which has made it all possible.

I am delighted to be able to announce that my successor will be Chris Horsfall, currently Head Gardener at Ulting Wick in Essex, who will bring a lot of practical and professional qualities to Colesbourne. He will take up his post in September and unlike me, will work full-time, so I look forward to seeing the garden flourish under his care. He just has to learn a lot about snowdrops in a hurry...

﻿
With the days to my departure for North Yorkshire ticking away I've been rather busy finishing things off here and preparing for the packing horror to come. It was therefore very pleasant to be able to leave that all behind for a while today and go to have lunch with my friends Walter and Celia Sawyer at their weekend home just over the county border in Warwickshire. Several of my gardening friends from the Cotswolds were there and the combination of good food, good company and a lovely garden on a decent day was delightful. I just hope it won't be to long before I see them again.

Images from a warm and golden evening

An old friend in the Wisley Plant Centre

In 1998 I spent a week or so in Kenya, travelling around botanising and visiting friends. While staying with Sue and Charlie Stubbs at Lake Naivasha, I saw that Sue was growing a pale pink Thunbergia in a pot on the veranda: with slightly silvery-hairy leaves it was rather attractive. Scouring the plant for seeds, I found just one capsule, with a single seed in it. This was passed on to Kees Sahin in Holland, where it germinated in the nursery and was grown up to flowering size, proving to be identical to its mother plant. Like all Thunbergia, it proved to be easy to propagate from cuttings, which is helpful as it has never been known to set another seed. In later years, the Sahin company commercialised it under the name 'Raspberry Smoothie' and it is now grown worldwide as a cutting-raised summer ornamental.  Although I knew this, I had never actually seen it for sale before today, when I drifted through the Wisley Plant Centre and saw it lined up with a number of other Thunbergia clones.
﻿﻿ ﻿In all these years of being acquainted with the plant I have never been able to identify it satisfactorily. Despite innumerable sources on the internet, it is not a form of the common Thunbergia alata - they differ in very many characters. I had hoped that I would be able to identify it from Kai Vollesen's volume on Acanthaceae in the Flora of Tropical East Africa, which came out in 2008, but despite poring over the keys and descriptions this evening I can't pin it down. As a cultivated plant it could have come from anywhere in the range of the genus, and not be an East African native at all - though that would seem most likely. So I shall have to press specimens and refer them to higher authority for identification.

I am curious to see how it performs - the plant I bought will decorate my parents' conservatory - as it is not a very good climber and needs to be supported  (its natural tendency is to sprawl). The best I've seen it was when it was planted in rich moist soil in full sun in the nursery in Boskoop, where it really took off and flowered freely from prostrate stems. 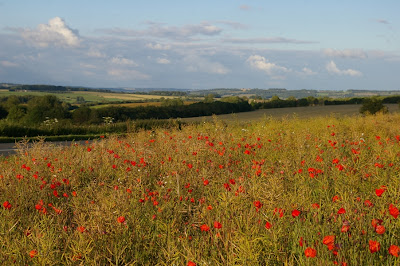 Views and close-ups from the cottage garden 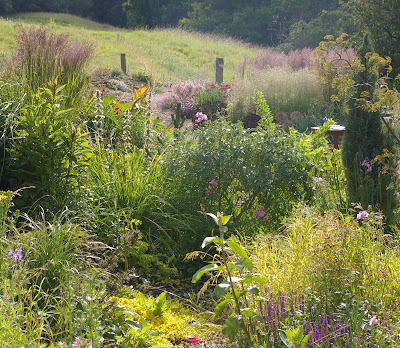 The RHS Woody Plant Committee met yesterday in Devon and afterwards paid a visit to Bicton Park Botanical Garden to see the great collection of trees there. The gardens at Bicton Park were first laid out in by the Rolle family in the 1730s, as a grand landscape for the now disjunct Bicton House. There are formal areas, including the Italian garden seen above with formal bedding at the top near the former orangery, and some good glasshouses, including the palm house dating from the 1820s. Much of the rest of the 60 or so acres is more informal, with the trees forming a parkland landscape through which a small train carries visitors. It is an unfortunate fact that the grounds have such distractions, including a mini-golf horror, and although very neatly kept the place lacks horticultural zest. With the title of 'botanical garden' appended one could hope for some decent labelling, but this is rather conspicuously lacking - a great disappointment.


Regardless of this, there are some very good trees there, with numerous champion or near champion specimens, making it well worth the visit. The Pinetum is especially rich in interesting species, with an enormous Abies cephalonica (41 m) and some beautiful specimens of Picea orientalis, to my mind the finest of all spruces. Mexican pines do well, and there are noteworthy examples of some from the southeastern United States that generally do not thrive in this country, though they would be considered runty on their native heath. Among them is Pinus echinata, which Owen Johnson (in his Champion Trees of Britain & Ireland 2011) aptly characterizes as "Very rare and very dull."  As seems to be traditional for WPC outings, it was wet at first and better later...

Thanks for all the responses to my challenge to identify the mystery plant. It is indeed a form of the Lady Fern, Athyrium filix-femina, and as Michael guessed, it is the clone called 'Caput Medusae'. Marie clearly came very close too - and I am intrigued to know how the Danish 'curly kale' fern looks.

'Caput Medusae' is one of the most extreme variants of its very variable species, with the frond converted into a dense tuft of intertwining growth at the top, forming a series of tight and rather hard balls of proliferating tissue. There is no sign of sporangia. The whole plant is no more than about 20 cm high and the resemblance to parsley is remarkable. I tried to ge an image of it tonight using my scanner, but the result (above) was more curious than informative.

The only information I can find about its origin is the note 'raised by Mapplebeck' in Charles Druery's British Ferns and their Varieties (1910). John Mapplebeck was one of the great Victorian fern enthusiasts, whose name is attached to a good crested form of Dryopteris affinis, 'Polydactyla Mapplebeck'. I was given it by a kind friend in Ireland, but it seems to be rather a rare plant, and very desirable to judge by the reactions of visitors who see it - there is a waiting list...
Posted by John Grimshaw at 22:35 7 comments:

A plant very different to what it seems... suggestions in 'comments', please.
Posted by John Grimshaw at 19:30 14 comments:

﻿﻿
Perhaps the most outstanding plant in flower in the cottage garden this week has been a group of three stems of a white-flowered Lilium martagon, the Turkscap Lily. This is a very robust clone, which differs from the usual white martagons in having a pink tinge to the outer surface of the segments: the usual white version, known as var. album, has no pink in the flower. Var. albiflorum has pink spots on a white background, so this plant doesn't fit either name﻿﻿﻿ - if it matters.


The origin of the rather strange epithet martagon is unclear, but it has been used since the mediaeval times for lilies with reflexed segments forming the typical 'turkscap' flower shape. Lilium martagon is regarded as something of a country cousin amongst lilies by some  - 'coarse and unattractive' was the rather harsh judgement of Woodcock & Stearn (1950), whose monograph Lilies of the World remains essential reading for the genus, but I am very fond of it. It has the very useful attributes of toughness and resilience, naturalizing freely and surviving where more refined lilies would soon disappear, and is perfectly happy on alkaline soil. It is naturalized in many wild gardens, including here at Colesbourne, and looks lovely under a light tree canopy.