The Black Walnut at Marble Hill 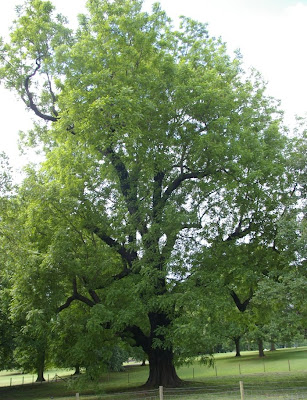 The parkland surounding Marble Hill contains many fine mature trees, although, as was the case across southern England, many fine specimens were lost in the Great Gale of October 1987. One of the survivors, fortunately, is a magnificent Black Walnut (Juglans nigra), which has been noted for many years as one of the finest specimens of the species in this country. It was placed first by Elwes and Henry in The Trees of Great Britain and Ireland (1907), having been measured in 1905 at 98' (29.8m), with a girth of 14' 3" (equivalent to a diameter of 136 cm), but was recorded at 'only' 27 m, with a diameter of 184 cm, by Owen Johnson of the Tree Register of the British Isles in 2001. So although it has put on girth it has diminished slightly in height, but still presents an image of great vigour and has a full crown of branches and foliage. There are now others in England that are taller, or of slightly greater girth than this tree, but it would seem (according to TROBI) that none achieve these proportions of both height and girth with a full canopy. 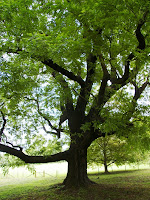 The old Black Walnut at Marble Hill (I saw a much younger one too) is said to have been planted by Henrietta Howard in the 1720s as part of her landscaping of the park. The species had been cultivated in Europe since the early seventeenth century, being a conspicuous and valuable timber tree of the Virginian forests - indeed, it was one of the most important and largest-growing constituents of the native North American forest, a giant amongst the giants. In this country it really appreciates the warm summers afforded by south-eastern England, and at Marble Hill it was able to get its roots into rich alluvial loam, not far from the Thames, which must account for its great size. Juglans nigra is seldom planted these days; a shame, as it is one of the great parkland trees if there is space, but I was heartened (in a slightly apprehensive way) to see a hearty young specimen of it for sale, crammed into a 10 litre pot, at our local Countrywide shop today, for £22.95. With their vigorous taproots walnuts do not like confinement in pots, or the trauma of disturbance, but perhaps this one will be bought soon and quickly planted, preferably following Henry John Elwes's recommendations:  'it should be sown or planted in small, deeply-dug patches in a rich wood, kept free from weeds and protected from mice, rabbits, and boys...'

The nuts of J. nigra seldom ripen well in England, but are edible when they do, having a distinctive strong flavour. Unfortunately the architecture of the shell is so convoluted and ribbed that it is impossible to extract the meat neatly, so they are sold as cracked fragments in American supermarkets. My mother once converted a packet of them into very tasty biscuits for me, and when in Oregon in March I had a 'shake' made with Black Walnut ice cream that was delicious (but very calorific). 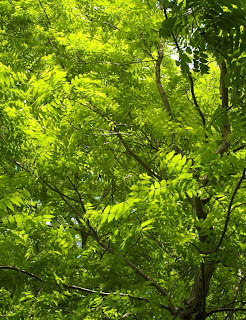 The lush foliage of the Marble Hill Black Walnut
Posted by John Grimshaw at 22:41