Two friends on Facebook - not necessarily the same as Facebook friends - have recently posted interesting pictures of plants, and given permission to use them here. 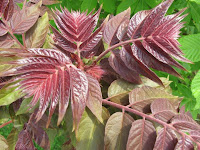 Jim Murrain, of Kansas City, Missouri, posted this image of a red-leaved Ailanthus altissima, which is said to have red inflorescences too (originally at http://www.facebook.com/home.php#!/photo.php?pid=1194543&id=1190461654). I first heard of its existence from his partner Jim Waddick a few years ago, when it was but a fable out of China: now they've obtained material from Jim W's authorial colleague (Iris of China) Zhao Yu-Tang. It apparently has no cultivar name as yet, though 'Prince of Darkness' might be appropriate for a plant with dangerous ways. Despite this, it looks like a really interesting addition to the roster of red-leaved trees and has huge potential for stunning effects when coppiced to produce vigorous new shoots. 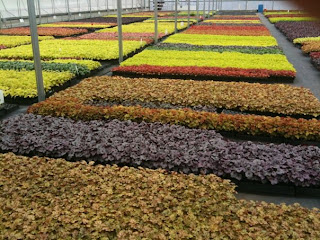 Dan Heims and his colleagues at Terra Nova Nurseries in Oregon are famous for their development of Heuchera and its allies (as well as many other plants) into a Joseph's coat of colours, the likes of which could not have been imagined ten or so years ago. This is an image of the Heuchera greenhouse at Terra Nova (originally at http://www.facebook.com/l/486fa;www.terranovanurseries.com).
Posted by John Grimshaw at 07:04