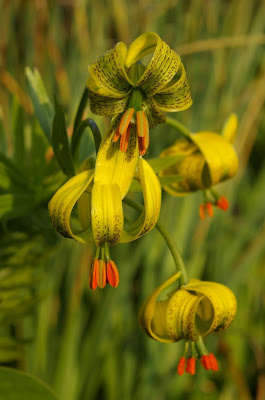 Lilium pyrenaicum
The first three lilies of the year have opened almost simultaneously in my garden and fortuitously link together the yellows of two shrubby peonies in flower in the same border. Two of these lilies are rather unusual; the third, Lilium pyrenaicum, is, or was, a familiar cottage garden plant and is even naturalized in a few places in Britain. It was in the garden here when I moved in, several clumps competing with the weeds: it is a moot point whether I would grow it if I'd had to acquire it from elsewhere. I like the many narrow leaves densely set around the stems, giving a very lush effect as it emerges, but the flowers always seem too small for the plant, and they stink - true festering lilies. But it is an amenable plant, will grow in the meadow (where it is not yet in flower, though only a couple of yards from the plants in the border) and is never untidy, so I'm happy to give it its place. 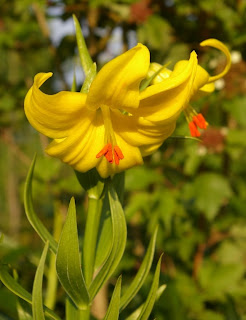 There are a number of related, turkscap-shaped lilies in Europe, including the red L. pomponium in the Alpes Maritimes and L. chalcedonicum in northern Greece. Elsewhere in the Balkans different mountain ranges harbour different species or subspecies allied to L. pyrenaicum; L. carniolicum (or L. pyrenaicum subsp. carniolicum) and L. bosniacum are two from the 'former Yugoslavia'. Perhaps the most distinctive is L. rhodopaeum from the Rhodope Mountains of Bulgaria, with unspotted deep yellow flowers and vermilion pollen. As in L. pyrenaicum its leaf margins and the veins underneath are picked out in fine white hairs, which gives the foliage a certain elegance. One of my plants has one misshapen bud, possibly from a nip of frost, but the larger has two beautiful flowers open. I am not now sure of their source, but the seedlings accompanied me back from the Netherlands in 2003, as did those of L. kesselringianum, the third of the trio. 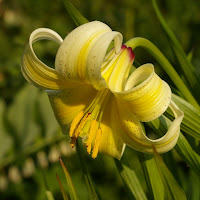 As with the L. pyrenaicum alliance in Europe, in eastern  Turkey and the Caucasus there is a complex of obviously related lilies centred on the relatively well-known L. monadelphum. That is nowhere near blooming here yet. Lilium kesselringianum is one of these, shorter and slighter in stature than L. monadelphum, with more slender flowers in pale creamy yellow. They are adorned with a few spots in their centre and have strong scent, sweet but mixed with the fetor of the clan. All these lilies seem very happy in light calcareous soil, but apart from L. pyrenaicum do not multiply vegetatively, so I must make sure they're pollinated, and try some scales later. 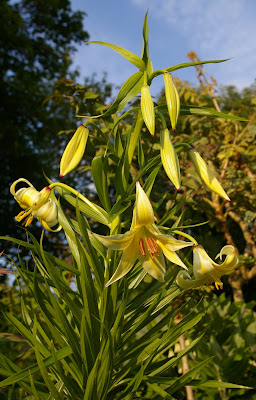