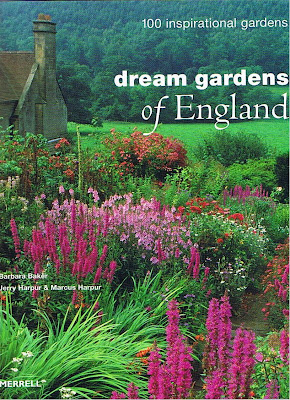 Somewhat to our surprise, a couple of months ago we learned that Colesbourne Park was to be featured in a book called Dream gardens of England with a pretitle (if that is the opposite of subtitle) 100 inspirational gardens. Although we have been in the Good Gardens Guide for several years, it is a nice accolade to be included in a book featuring so few of this country's fine gardens.

Dream gardens of England, by Barbara Baker with photography (mostly) by Jerry and Marcus Harpur, has now been published by Merrell, at the RRP of £24.95. It is a large, solid well-produced tome, copiously illustrated: each garden selected has a spread or two for itself, with a short introductory text and an abundance of photographs. For example, Colesbourne has seven photos, apparently taken several years ago on a particularly drab February day, which is unfortunate.

Choosing just a century of great gardens to feature in such a book is not easy, and while it is good to see many lesser-known ones appearing, the choice is a little odd. Most are privately-owned, and although a few of the great National Trust properties (Sissinghurst and Petworth, for example) appear, gardens run by institutions generally do not. One can understand Wisley or Kew being outside the remit, but Rosemoor or the Oxford Botanic Garden are as dreamy and inspirational as many. The exclusion of Great Dixter, The Garden House (the Buckland Monachorum one, at least - there are others), Pettifers, East Ruston Old Vicarage, etc, is strange, unless they appear in the preceding work, Dream Gardens, which I have not seen. The choice, however, is a personal one, and there are many here I must go to see for myself.
Posted by John Grimshaw at 10:34