Going through the post one morning last week I heard a noise of satisfaction from Adrian. Enquiring what it was, I got the reply 'tickets for Twickenham'. To anyone else that would mean we were going to a rugby match, but no, we were going to see Pope's Grotto. 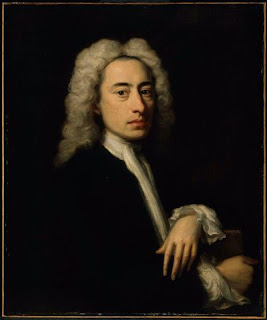 The diminutive Alexander Pope (1688-1744) was a poet and superb wordsmith, responsible for such lines as 'Hope springs eternal in the Human breast', 'A little learning is a dangerous thing' and 'Fools rush in where angels fear to tread', though I must say I find his poetry more palatable in portions than in the whole. In his lifetime he commanded both respect and affection from a wide circle of patrons, friends and acquaintances, and  played an important part in the development of landscape gardening. The Oxford Companion to the Garden's entry for him starts; '[his] maxim 'Consult the Genius of the Place in all' remains the single most useful principle of garden making and possibly the only rule it is difficult to break successfully'. His influence on the art and philosophy of the landcape is explored fully in Mavis Batey's book Alexander Pope, the poet and the landscape (1999). The portrait is of Pope in about 1736, by Jonathan Richardson, borrowed from Wikipedia. The original is in the Museum of Fine Arts, Boston.

Pope's translation of the Iliad made him a lot of money, enabling him to build himself a Palladian villa on the bank of the Thames at Twickenham. Situated between the road and the river it had only enough room at its front for a lawn and some famous weeping willows: to make his own garden he bought a piece of ground on the other side of the road and there created his own landscape, a mixture of old-fashioned features and the new 'romantic' style. In the cellars below the house he started to create a grotto, whose front part forms an undercroft to support the villa above. Its rear portion formed a tunnel below the road to reach the garden. Originally planned as a romantic grotto, or nymphaeum, towards the end of Pope's life it took on a new lease of life as a sort of museum of geology and mineral specimens. He wrote and entertained guests there, brightening the place with mirrors and even a camera obscura of some sort. With a spring trickling water and sufficient illumination it must have been a remarkable place, with light glinting off the crystals embedded in the walls. 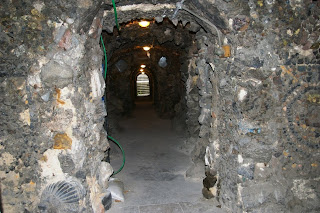 view into the grotto and through the passage below the road

After his death the villa passed from owner to owner, until it was demolished in 1808, inspiring a painting by JMW Turner. A Victorian building was put up in its stead, currently occupied by a school though in fact now up for sale. Beneath it the grotto survived, the only remainder of Pope's activity on the site - preserved, according to the grotto's historian Anthony Beckles Willson (who was our guide yesterday), solely because of its convenience as a passage through to the garden beyond (long-ago built over). Long after Pope's death the grotto remained a popular place to visit, and many visitors removed souvenirs in the form of crystals and other specimens from the walls. Now it is opened once a year for public visitation, with limited numbers of tickets being available: yesterday was the day.
The grotto is reached by going through the school, and is tucked away behind some very ugly extensions that cut out all the light that might possibly have illuminated it. It is dark, dirty and stinks of foxes, but enough remains to give an impression of what it looked like in Pope's time. There are still some crystals and other features - odds and ends of architectural salvage - embedded in the walls to give an impression of its 'bling' in its heyday. In one corner is a section of the trunk Pope's famous weeping willow. This was Salix babylonica, now a very rare tree, but then had been recently introduced. Pope's tree possibly came from one of his neighbours, Thomas Vernon (a 'Turkey merchant') who brought cuttings back from the Euphrates in about 1730 (according to Peter Collinson's account, related by Bean), although there are other stories. 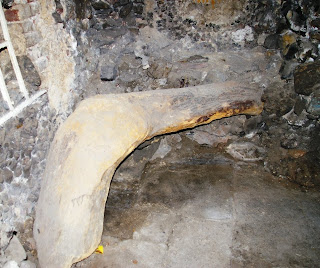 the willow trunk
With the sale of the site the grotto's future is slighly unclear, but it seems that a restoration project is planned, with Heritage Lottery funding applied for, and it is to be hoped that it can be cleaned up and made available for visits more frequently in future. 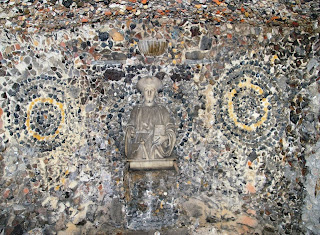 A statue of St. James of Compostela (not placed here by Pope) and walls showing decoration in different coloured stones. The black 'stone' in the circles appears in fact to be some sort of slag, perhaps from glassworks, as it is vaguely lustrous.
Posted by John Grimshaw at 10:50