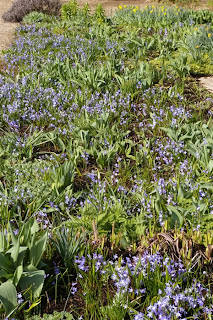 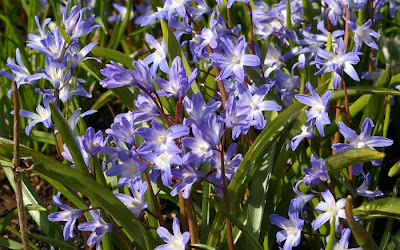 In April 1874 Henry John Elwes undertook a journey in western Turkey, then a poorly known and seldom visited area. It was on this expedition that he discovered Galanthus elwesii and a number of other bulbous plants new to science. In his own words, from his unpublished memoir Horticulture (c. 1920-22?): "I found several new fritillaries, irises, tulips and, best of all, that lovely bulb, Chionodoxa luciliae [now C. forbesii]. This plant was afterwards collected in large numbers by Mr G Maw, who followed my route in part some years later, and has now become a perfect weed in my own and many other gardens. Three bulbs planted in a broad border at Colesborne have seeded so profusely and spread so widely that the form a sheet of blue during March, and as their leaves die down very quickly they do not in the least interfere with the summer and autumn flowering plants which succeed them."

It is not clear from this whether his first three bulbs were from his own collection, or that made by George Maw. Regardless, it is still a great feature of the 'broad border' at Colesbourne Park, as seen above - although only in one half, as the other half has been resoiled at some time, and the Chionodoxa is much less happy there.

In view of this, it is of particular interest that HJE continues "One of the most curious and inexplicable facts in horticulture is the variation in constitution of many plants which, growing in exactly similar conditions in nature, sometimes multiply and spread in our gardens, or more often dwindle and die out."

"I remember at a meeting of the Linnean Society some years later being severely sat upon by no less a man than Prof Huxley who was reading a paper on gentians. He reproved me for using the word 'constitution' as applied to plants. He said that the word was a 'verbal anodyne to blind me to my own ignorance.' To this I replied that though I was always conscious of my own ignorance, I knew of no other word in the English language which, when applied to plants in the same sense in which it is applied to human beings, so well expressed the facts that every gardener is continually meeting with, and that I should continue to use it until he told me of a more fitting word. To this I got no answer..."

How one would like to have been there!
Posted by John Grimshaw at 12:08