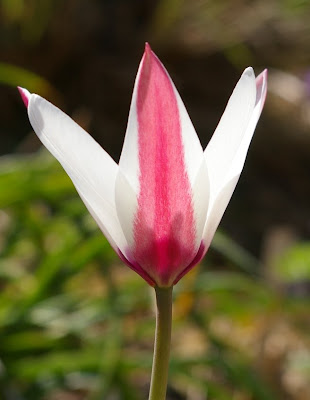 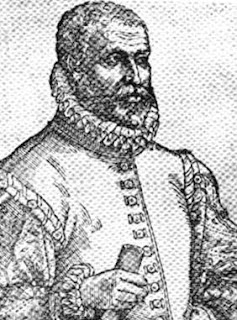 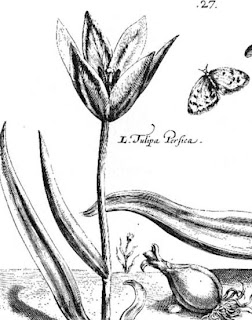 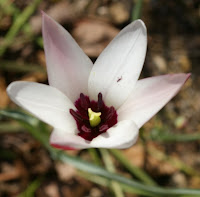 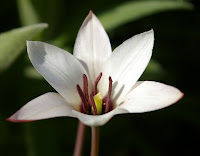 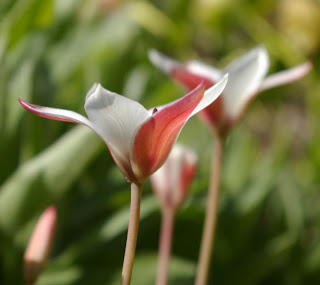 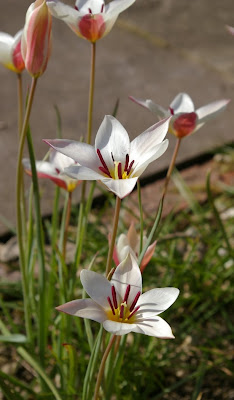 One of the prettiest of tulips, Tulipa clusiana, is now at its peak with all three clones grown here colouring-up and opening simultaneously. Grown in Britain since the early Seventeenth Century and known to generations of gardeners as the Lady Tulip, its botanical name commemorates Charles de l'Ecluse (1526-1609), the Flemish botanist usually known under the latinized form of his name as Carolus Clusius. Clusius is credited with having brought the first tulips to Holland when he moved from Vienna to set up the Leiden Botanical Garden in 1593, but there is little evidence to connect him with Tulipa clusiana. In his lifetime, or shortly thereafter, it was known as Tulipa persica (as illustrated here in Crispin van de Pas's Hortus Floridus of 1613) and the epithet clusiana was not attached to the plant until 1802, when it was published in Redoute's Les Liliacees.

As a wild plant Tulipa clusiana grows from Iran eastwards to Pakistan, where it is a variable plant, with flowers having pink markings on either a white or yellow flower, with or without a dark centre to the flower. Various names have been attached to different variants over the years, of which Tulipa clusiana var. stellata has been commonly used for the white and pink version from the western Himalaya, and var. chrysantha for those with yellow and pink flowers, of whiich 'Cynthia' is a representative. Current taxonomy regards the various combinations of colours and ploidies as forms of T. clusiana (see Richard Wilford's Tulips (2006) for details).

The top and fourth pictures show the clone cultivated for centuries as Tulipa clusiana. Its flower has a very distinctive, neatly triangular shape, with a rich cherry-red stripe on the outer segments. It is sterile and spreads by stolons, producing (if happy) patches of narrow grey leaves, with a few flowering shoots among them. It is a pentaploid (i.e. has five sets of chromosomes) which no doubt explains its sterility and vigour. This clone has never, so far as I know, been distinguished by a cultivar name, being what the Dutch bulb growers have always sold simply as T. clusiana. I have little doubt that it is an ancient selection grown by the Ottomans that reached Europe with the efflux of bulbs from Turkey in the late Sixteenth and early Seventeenth Centuries.

After four hundred years, however, it seems as if the Dutch may no longer be growing this historical plant. My bulbs came from the Irish company Heritage Bulbs (which specialises in old-fashioned bulbs) some years ago, and was said to have been from the last grower of the old stock in Holland. A couple of years ago I was sent some more bulbs by them labelled Tulipa clusiana , which they had received from Holland claiming to be the real thing, but over which they had doubts. They asked me to look into it and when the bulbs flowered it was obvious that the newer stock was rather different. With both clones flowering again today (fifth and sixth pictures) it was possible to look again at the differences. There's not much in it, though the flower is broader and less acutely triangular, the reddish colouring is a fraction paler and the plant is shorter. Other characters clinch the difference, however, with this impostor being fertile and apparently not stoloniferous. It is of course a very pretty plant and in botanical terms, a genuine representative of Tulipa clusiana forma clusiana, but it is certainly not the old original clone, which I think ought to be distinguished by a cultivar name that recognises its long history.

The third clone is 'Lady Jane' (final pic), which is attribtable to forma stellata on account of its yellow throat (I don't grow any with yellow ground colour). This is an extremely attractive clone, with soft pink markings externally: it is evidently a good doer in the garden.
Posted by John Grimshaw at 18:44