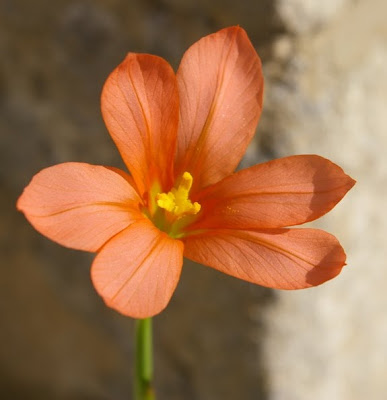 For some weeks I have been watching the development of an inflorescence on a pot of seed-raised Moraea, which are flowering for the first time. The label says Moraea elegans, and the sowing code number tells me that the seed was obtained from Kirstenbosch Botanical Garden when I was there in September 2004 and sown in August 2006(!). Three and a half growing seasons to flowering isn't too bad, I think, but it is a long time to have spent when the plant turns out to be wrongly named!

The long-awaited flower finally opened this weekend, but instead of the yellow and orange flowers with blackish-green blotches of M. elegans (seehttp://www.pacificbulbsociety.org/pbswiki/index.php/Homeria), it is a soft orange and the flower is a different shape. It is in the same section of Moraea, formerly in the genus Homeria, which narrows the choice down out of the 196 recognised species, but it has proved difficult to identify it precisely. My best guess at present is M. collina, but any suggestions are welcome. It has a single long leaf and a rather gawky unbranched stem, with the first flower solitary at its tip - not a pretty growth habit in a pot.

I cannot blame the source of the seed for the confusion - it is easily done, and indeed it is always possible that I put the label in the wrong pot myself, but it would be good to grow true M. elegans.
Posted by John Grimshaw at 19:01