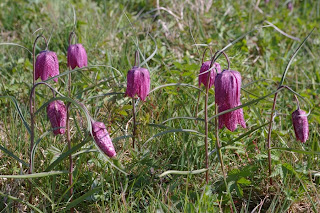 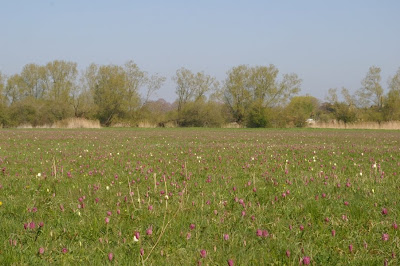 North Meadow at Cricklade, a National Nature Reserve, is one of the largest remaining ancient meadows in the upper Thames valley, covering 44 ha. Managed since the Middle Ages as a common, with hay-making and grazing rights governed by a Manorial Court Leet, it has preserved its natural high levels of biodiversity while most such lowland meadows have been destroyed by intensive agriculture. Its highlight is the population of Snakeshead Fritillaries (Fritillaria meleagris), accounting for 80% of the wild population in Britain and creating a shimmer of purple across the grass at this time of year. It is a lovely sight and was being enjoyed by many visitors this morning. It is ironic that current thinking regards Fritillaria meleagris as an alien plant in the British Isles, but its status as a protected rarity rightly remains in place, enabling it to act as an ambassador for less conspicuous inhabitants of its threatened meadow habitats.
Posted by John Grimshaw at 13:04