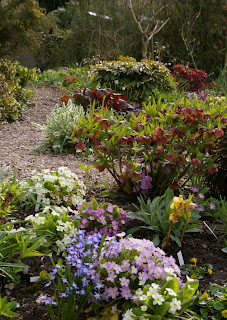 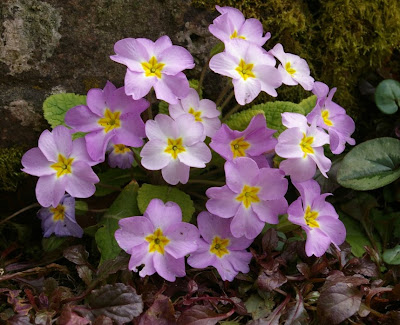 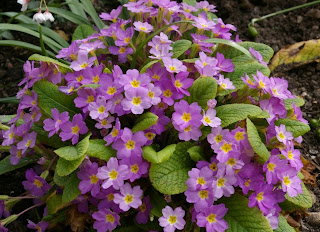 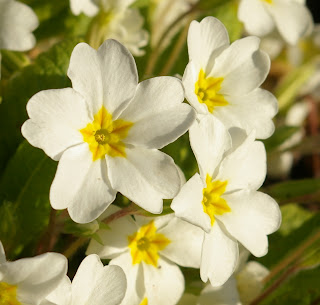 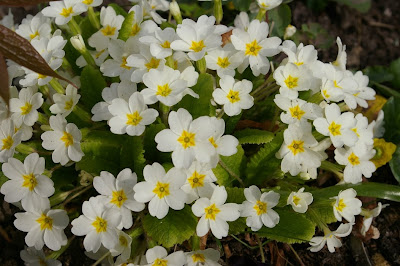 For the past two or three weeks one of the highlights of the garden here has been the masses of self-sown seedlings of Primula vulgaris subsp. sibthorpii, forming large clumps covered in flowers in varying shades of pink and white.

The common primrose, Primula vulgaris, has a wide range in Europe and western Asia, mostly represented by the normal pale yellow subsp. vulgaris, but from Greece eastwards it is replaced, at least in parts, by subsp. sibthorpii. This commemorates, John Sibthorp (1758-96), Sherardian Professor of Botany at Oxford from 1784, succeeding his father Humphrey. The latter was said to have given only one rather poor lecture during his tenure: whether John Sibthorp ever gave any is open to question, as he almost immediately set off on a lengthy botanising journey around Greece accompanied by the artist Ferdinand Bauer. The ultimate result of their endeavour was the extraordinary Flora Graeca, produced and published following Sibthorp's death, using an endowment he left for the purpose. The tenth and final part was published in 1840: only 75 full sets were ever printed. In consequence this magnificent work is an incredibly rare treasure: the Department of Plant Sciences at Oxford holds a set, plus all the unpublished materials from the project, and a digitised version is now available online at http://www.bodleian.ox.ac.uk/science/eresources/flora_graeca

This enables us to see Bauer's painting of the primrose that would later be named after his employer, but was then known as P. vulgaris var. rubra - see http://www.bodley.ox.ac.uk/users/millsr/isbes/FG/FGE1/

According to John Richards' book Primula (1993) Sibthorp's primrose varies from the common form in a few technical characters such as leaf shape and colour (grey-green below, rather than green) but the most obvious distinction is that its flowers are pink to purply-red or white (or very occasionally yellow), these differences being further supported by its distribution. It has been cultivated, it seems, since the early seventeenth century, when it was known as 'Tradescant's Turkie-Purple Primrose'. It is assumed to be one of the sources of different colours in garden primroses. For many years the standard "Primula sibthorpii" in cultivation was a dull-coloured plant that may even be a hybrid - this was the first plant I grew under the name sibthorpii, but in recent years wild material has been collected by several travellers to Turkey, resulting in much more interesting plants, including some that are really very dark indeed, such as the clone 'George Smith' (not illustrated here).

The pink forms of subsp. sibthorpii are a nice clean colour, with a white band around the central yellow 'star', thus differentiating them from plants with unpleasant muddy pink flowers that arise when common primroses cross with a garden selection. They vary somewhat in shade and in flower size. White forms are also in cultivation from wild origin, including one called 'Taigetos', apparently having been found in those mountains in the Peloponnese, although John Richards says that it does not occur in that area.

For many years I have grown a lovely primrose called 'Gigha White' (although this should properly be caled 'Gigha'), distributed by the late Richard Nutt and assumed to originate from the Isle of Gigha (last two pictures). It self-sows freely, breeding true if there are no other primroses around, and starts producing its very abundant flowers early in the winter: I rate it as a superb plant. Despite its apparent Scottish origin, I have little doubt that it is a representative of subsp. sibthorpii.

Bringing together a selection of clones of subsp. sibthorpii in this garden has had wonderfful effects on their fertility, and they are spreading rapidly thoughout my woodland area, evidently appreciating the light calcareous loam. They put themselves in all sorts of inconvenient places - in amongst hellebore crowns for example, and the plant in the second photograph is wedged into a brick stairway. So far I have not seen any evident intermediates with subsp. vulgaris (also present in the garden), but there are one or two plants that look as if they are hybrids with something of the 'Wanda' persuasion, and others that may have crossed with garden polyanthus. Whatever their genetics, these seedlings are making a really lovely contribution to the spring display.
Posted by John Grimshaw at 21:08