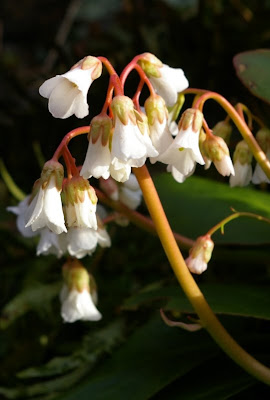 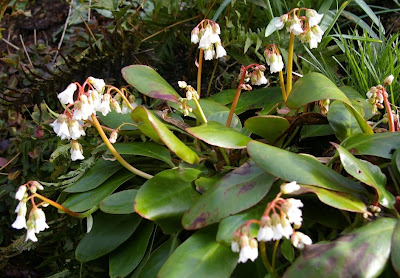 A cold winter can have advantages. Among them is the delayed flowering it induces in species that are apt to flower early in the year and often get nipped by frost in consequence; the delay gives them the chance to open in milder weather with less risk of frost damage. Magnolias are the classic example of this, but Bergenia emeiensis is another that really benefits from a late season. It is now looking good here, flowering freely on a clump that has been in situ for about four years.

Bergenia emeiensis is a native of limestone cliffs in Sichuan, where it often grows under overhangs, gaining its moisture from seeps in the rock. Although first collected in 1935, on Emeishan (Mt Omei), it was not named until 1988, and is now known from about four mountain areas (seee Ogisu & Rix, 2007, in Curtis's Botanical Magazine 24: 2-6 for an excellent account of the species and its relatives). It was first introduced to cultivation in the West by Mikinori Ogisu, who collected it at 1750 m on Emeishan in 1982 under his collection number Ogisu 82003. My plant is referable to this collection, having been given by Mikinori to Ruby Baker, who passed it to me.

When first introduced it was regarded as tender and cosseted in pots under cover. This enables the flowers to develop reliably, but the plant itself is completely hardy, maintaining its attractive deep green leaves unscathed all winter. For a Bergenia it is a very tidy and neat plant and when in flower it is very elegant. My plant grows in the open, unprotected, though above a low wall over which it hangs, and receives next to no attention through the year.
Posted by John Grimshaw at 21:29