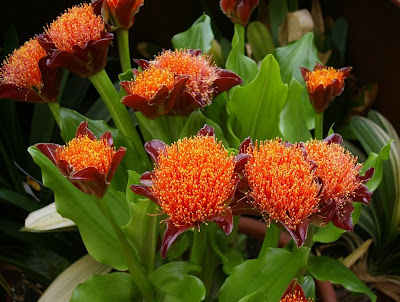 This is Scadoxus puniceus, an African amaryllid, growing in my parents' conservatory. The species is widespread in southern and tropical Africa, but this plant was given to me as a seedling by Malcolm Coe (my doctoral supervisor in Oxford). He had grown it from seed collected from plants growing in sand dunes near Richards Bay on the KwaZulu-Natal coast in the mid-1990s. The seedling flowered in its third year, which seemed remarkably fast for a plant with a large bulb. It stands in the frost-free conservatory year round, emerging in spring and bearing its large leaves through the summer until they collapse in autumn. The pot is then kept dry until signs of growth reappear. Ample water is needed when in growth, and it receives occasional liquid fertiliser feeds.

Although it has not been repotted for several years, the plant grows extremely well and this year has twelve inflorescences, each standing about 45 cm tall. A cluster of flowers is surrounded by a number of brownish-red, somewhat fleshy bracts, which give the inflorescence its substance. The flowers are individually small, with short perianth segments and long stamens: these are responsible for the 'shaving brush' appearance of the flower-head.
Posted by John Grimshaw at 20:56