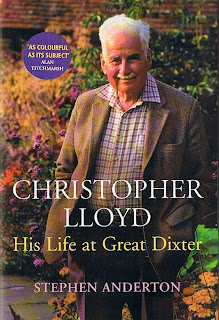 Over the weekend I read the much commented-on biography Christopher Lloyd, His life at Great Dixter by Stephen Anderton: it's a surprisingly short book, and very readable, so this was not a chore. Readable it may be, but it is also disappointingly shallow. The subtitle says it all: it is a narrative of Christopher Lloyd's life with a minimum of analysis or context. The first 112 pages cover his first 50 years,including his emergence as an important gardening author, but are largely devoted to his relationship with his mother, Daisy, who is portrayed as dreadfully domineering. One feels that Anderton was actually at least as fascinated by Daisy as with her son, but even so there is no real attempt to analyse the relationship, or its implied consequences.

Christopher Lloyd emerged from her apparent shadow aged 50 and became increasingly famous as the years went by, until his death at the age of 85 in 2006. By this time he was grand old man of British (if not world) gardening, an outwardly gruff-seeeming old codger, known to everyone (rather familiarly) as Christo. I met him only once, towards the end of his life, and evidently missed out on knowing a remarkable man. Much of the Christo legend is enshrined in the latter part of the book, covering his last thirty-five years, but it is extraordinary that only 92 pages were allowed to cover this, by far the most important period of his career. In consequence, much is skated over and towards the end it turns into something of a catalogue of things he did. Interesting, but not terribly enlightening.

I was surprised to see how few people were acknowledged for their contribution, which suggests that Stephen Anderton did not canvass opinion widely, whether from Lloyd's friends, or his detractors. The voice of numerous gardening contemporaries and colleagues could have been heard; there are plenty of people who could expound on the relationship between Christo and Graham Stuart Thomas, for example. Neither do we hear from the Americans, especially the gay guys, he encountered on his tours, whose liberating presence was so important to Christo; although we are told that he revelled in their company there is no mention of the overt groping that went on. And only a straight author could include (in the distinctly mean allocation of photographs) no less than five pictures of the young Christopher with his mother, but fail to include a picture of Lanning Roper, 'the blond and preposterously good-looking' American who may have provided Lloyd's only physical relationship.

This absence of context and critical analysis is really the most disappointing thing about the book, but running it a close second is the lack of serious commentary on his gardening. I realise that this was not Anderton's intention, but gardening was what Christopher Lloyd was about and this is a big omission. We can of course re-read his writings from his copious output, but there is no attempt to discuss his place in the pantheon of horticulture or how his work has influenced the current generation of gardeners. The symbiotic relationship between Christo and Fergus Garrett that led to the burgeoning anew of the Great Dixter garden gets its due prominence, however.

This is a life-story, not a scholarly biography, and thus leaves the field open for this and much more Lloydiana to come.
Posted by John Grimshaw at 17:57