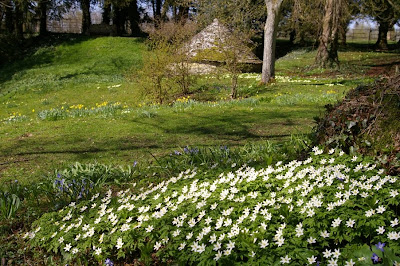 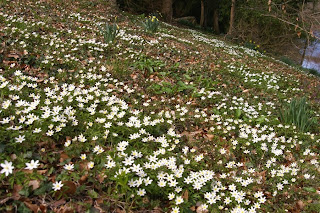 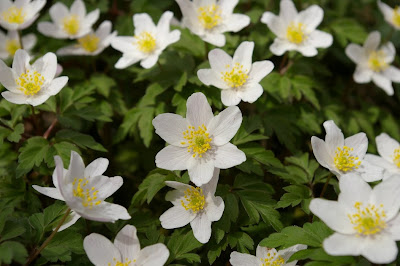 Two firsts have occurred on this lovely April day. It was the first occasion when it was comfortable to take tea by the pond, and the first electioneering literature arrived, from the Lib Dems. They are the only ones, not excluding even Comrade Lord Mandelson, who know where we live. I read the Turkey Club Yearbook instead.

In the current rush of growth and flowering it is hard to make a choice on what to write about, but I think it has to be the Wood Anemone, Anemone nemorosa. This is possibly the most charming of our native woodland ephemerals and we are lucky that it is abundant in the grounds of Colesbourne Park as a wild plant. After the snowdrop display, the anemones on the lake bank in April are perhaps the prettiest show of flowers we have.

Although in the wild it is often a denizen of woodland understorey, Anemone nemorosa is also very successful in thin turf in the open and in this habitat it is a feature of the area around the ice house. On the lake banks, where it is most spectacular, it grows amongst fairly coarse grasses, ivy, etc, competing very successfully with them. The display there gets better and better each year as the other vegetation is reduced in vigour by strimming and removal of the hay each summer. We refrain from planting snowdrops in the best anemone areas to avoid the display of the latter being disfigured by coarse tufts of foliage.

Despite the abundance of the wild plant hereabouts, I have had very limited success at establishing the assortment of named clones of Anemone nemorosa in either garden. Some horrid creature eats the foliage and buds of anemones here: in the abundance of the wild ones this is hardly noticeable, even though perhaps a majority of buds are eaten, but small clumps in cultivated parts of the gardens are perhaps more conspicuous and the damage is severe. There is little variation in the wild plant here - slight differences in the width of the 'petals' for example, and a couple of clones turn a rich pink as they fade, but all are the standard white with a slight pink flush outside during the peak of their flowering period.
Posted by John Grimshaw at 18:53