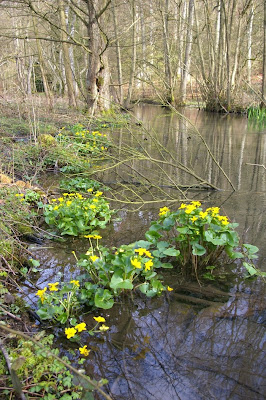 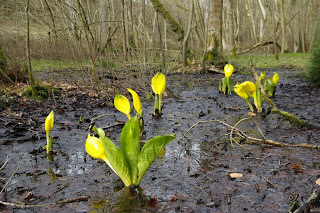 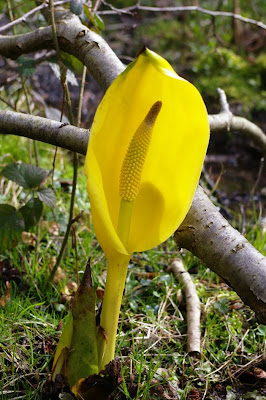 Upstream of the Colesbourne Park lake the Hilcot Brook flows through a narrow wooded valley, dominated by Alder in the damp ground by the stream. This is always where the wild Marsh Marigold (Caltha palustris) flowers first, presumably being a little more sheltered than in more open sites and with the constant temperature of the spring-fed stream to buffer it from the weather. It is always a joy to see the plants here in early spring.

Not far off are a couple of patches of Lysichiton americanus, whose common name Skunk Cabbage has been appropriated from its eastern North American relative Symplocarpus foetidus. Although Lysichiton does emit a somewhat musky odour it is not unpleasant. It is a native of the Pacific Northwest - I saw it flowering in damp woods in Oregon early in March - but thrives in the British climate and in some areas is rather too invasive for comfort. The plants in the Hilcot valley are believed to have been planted by Henry John Elwes, who attempted to create a wild garden there about a hundred years ago, but they have not spread beyond the small squashy areas they occupy. Desirable as aliens or not, they add a great deal of interest to this bit of damp woodland.
Posted by John Grimshaw at 12:36