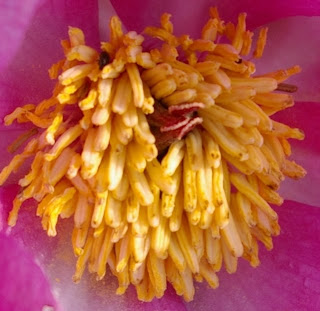 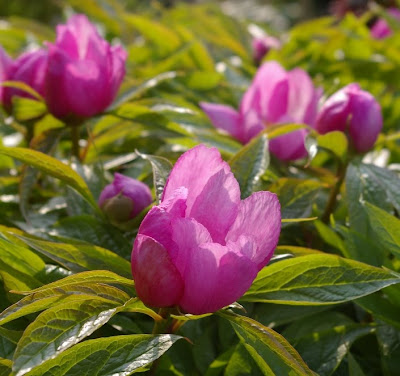 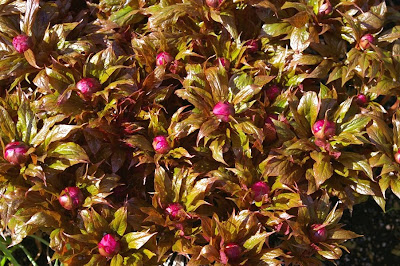 We are currently at the peak of the all-too short flowering period of Paeonia mairei, always the first peony to open here, beating P. mascula subsp. russii by some weeks. In most years it comfortably overlaps with the last snowdrops in late March, but not this year. According to the Flora of China it comes from deciduous woodland in western China: its name commemorates the botanical activities there of Edouard-Ernest Maire (1848-1932), a French missionary who had the resounding title of Pro-Vicar Apostolic of Yunnan.

The plants grown here at Colesbourne originated as wild-collected rootstocks from the infamous Chinese plant-seller Chen Yi, imported to Holland about ten years ago. They have proved to be extremely vigorous, making large clumps of stocky shoots flowering at about 60 cm high. Unlike other species, it has a rather short peduncle so the flower sits rather tidily quite close to the foliage. The flowers are not my favourite shade of pink, and fade off to a paler, washed-out sort of shade; the effect is nice at a distance, but they are always something of a disappointment, lasting only a few days.

For me Paeonia mairei is about travelling hopefully, as the red shoots emerge early and slowly develop through February and March, unfurling bronze foliage with dark red buds sitting conspicuously at its centre and thus giving a really rich effect among small spring bulbs (the last photo was taken 1 April). By flowering time, when it is more or less fully expanded, the foliage is green and stays that way until it gets tatty in late summer.

I lift and divide large plants of it in late August or early September, while the soil is warm, and it doesn't miss a beat. Any fragment with a bud will grow. Given its value in the garden, and its ease of propagation, it is surprising that it is not seen very frequently.
Posted by John Grimshaw at 18:05