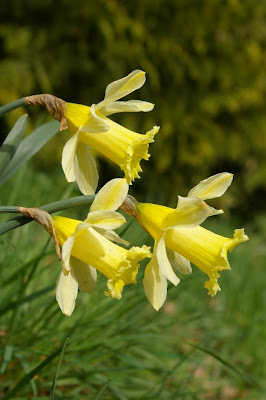 Narcissus pallidiflorus, in the excellent form collected by Dick and Ros Banks

The first of April has been a mixture of sunshine and showers, with the proportion of the former decreasing and latter increasing as the day has gone on, and at no time has it been warm. Whatever the weather the date is an important symbol of the return of spring, so I took a turn round the garden to take stock. It would still be possible to pick a small posy of snowdrops, although most of the flowers would be long past pristine: only one clump, a seedling group of G. plicatus subsp. byzantinus, looked really good. Of crocuses only a smattering of 'Ruby Giant' and 'Cream Beauty' remain recognisable. Such early-flowerers are now history for another year, while the stage is taken by hellebores at their peak, daffodils coming on fast, and things like primroses and pulmonarias bring a diversity of colour. Forsythia is just coming out, and Prunus mume has finally opened a few flowers, but there is little movement on the deciduous trees and shrubs.
Posted by John Grimshaw at 19:16