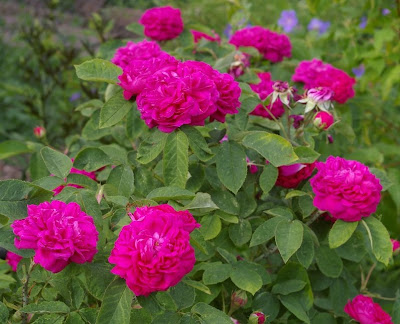 The only 'old fashioned' shrub rose in the garden here is 'De Resht', which we love for its neat, bright, fragrant flowers produced on a compact bush through the summer. With its tight growth habit it is an ideal mixer in the border, and would also make an ideal low hedge.

It was introduced from Iran by Nancy Lindsay (1896-1973), the somewhat bohemian daughter of the garden designer Norah Lindsay who in the 1930s twice travelled to 'Persia', as it then was, in search of plants. Several plants are ascribed to these trips, including Galanthus elwesii 'Deer Slot' (long known as 'Nancy Lindsay's Persian snowdrop'  though G. elwesii does not occur in Iran), but this rose is by far the best. One of my treasured possessions is a copy of Nancy Lindsay's rose catalogue - in later life she ran a small nursery from her home at Sutton Courtenay near Oxford - in which she described her stock in the purplest of prose. The entry for what she called 'Rose de Resht' is typical:

'Rose de Resht' N.L. 849. Happened on it in an Old Persian garden in ancient Resht, tribute of the tea caravans plodding Persia-wards from China over the Central Asian Steppes, it is a sturdy yard-high bush of glazed lizard-green, perpetually emblazoned with full camellia flowers of pigeons-blood ruby irised with royal-purple, haloed with dragon-sepals like the painted blooms on oriental faience. 7/6

They don't write catalogues like that any more.
Posted by John Grimshaw at 21:50