'A green thought in a green shade' 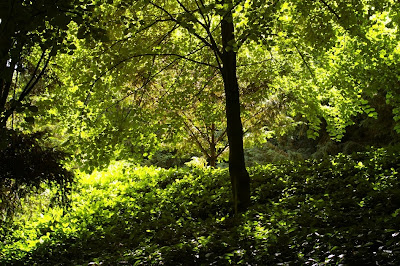 We continued our exploration of the Eighteenth Century landscape garden yesterday with a visit to Rousham House in Oxfordshire. The property has been in the same family (the Dormer-Cottrells) since the house was built in 1635 and is run by them in a charmingly unsophisticated but autocratic way - there are no guidebooks, shops or  tearooms, and, best of all, no children are allowed to spoil its peace. 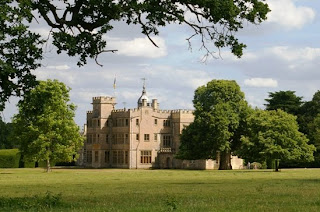 A family of millefleur Barbu d'Uccles occupied the front lawn, and a bridal car drew up for photographs as we arrived. Mrs Dormer-Cottrell enquired if we had tickets, and we followed an arrow to the gardens. Very soon we were enjoying a delightful old world herbaceous border and vegetable garden, with a rose garden adjacent to a venerable dovecot in which the original mechanism allowed a ladder (technically a 'potence') to swing round inside for the collection of squabs from their boulins - the original pigeonholes. 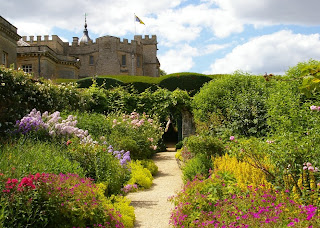 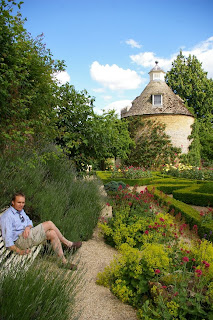 rose garden and dovecote
Lovely though these are, the principal feature of the Rousham garden is the landscape developed first by Charles Bridgeman (d. 1738) and modified by William Kent between 1737-41 into what became his greatest work, and is now the most complete survival of his informal landscape style. It was here that 'He leaped the fence, and saw that all nature was a garden', according to Walpole. 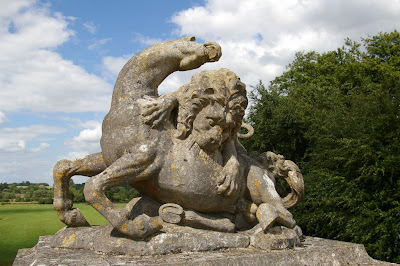 'Lion attacking a horse'
One of the first of of Kent's features visible as one enters the garden, is a large formal lawn in front of the house, sloping toward an imposing sculpture. Incidentally this lawn, beautifully mown, was a patchwork of wildflowers (White and Red Clover, Birdsfoot Trefoil, Selfheal) amidst the mowing stripes. The sculpture - a rather ferocious image of a lion pouncing on a writhing horse by Peter Scheemakers (1691-1781) - is set on the edge of a bluff , with a view out over the Cherwell valley to an 'eyecatcher' folly, bringing the formal garden and wider countryside into intimate association. This is the theme of the landscape - formality linked to the wild, enhanced by the carefully thought-out walks leading from one architectural or sculptural feature and its vista to another. 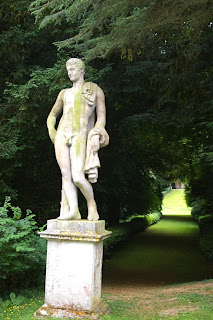 Apollo, at the end of the Long Walk created by Bridgeman
What strikes one most is the richness of effect that can be achieved by shades of green, and the interplay of light and shadow in such a landscape. On a bright summer day, with the scent of lindens wafting around, nothing more pleasing could be imagined as a place for ladies and gentlemen to stroll and converse: a perfect English Arcadia. 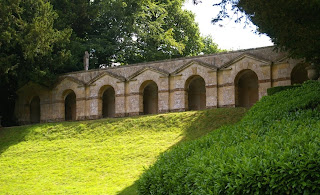 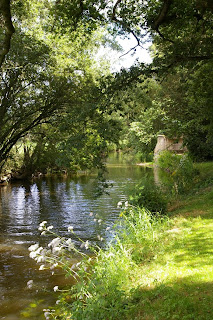 The River Cherwell - an integral part of the Rousham landscape
Posted by John Grimshaw at 22:07