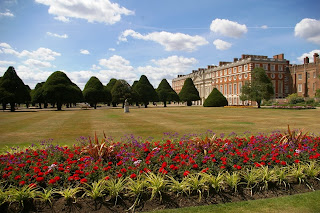 There was much to see at the RHS Hampton Court Palace Flower Show on Tuesday, but I haven't much time to write about it. Here are a few pictures and comments on things that caught my eye. 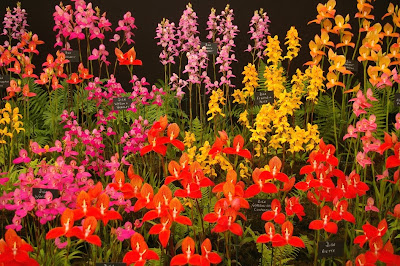 Disa is a remarkably diverse and numerous African genus of ground orchids, reaching its flamboyant pinnacle in D. uniflora from the Cape (seen in the foreground here). They have never been considered easy to grow, so this display by Dave Parkinson Plants was a tour de force in every sense and for me by far the most interesting stand in the Floral Marquee. 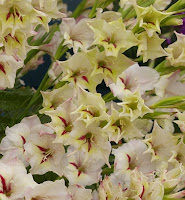 Also of South African origin are the much more familiar garden Gladiolus. Several stands showed the familiar large-flowered cultivars, but I was glad to see that new breeding work is taking place with Pheasant Acre Plants showing some new smaller-flowered seedlings they have raised. This unnamed seedling is particularly nice.

No horticultural show is complete without a stand from Dibleys. This was the side of their display featuring their begonias, coleus and other plants - there was an equally impressive show of Streptocarpus as well. The richness and diversity of colours and textures available in Begonia is compelling. 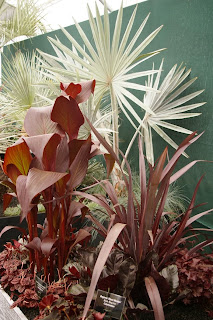 A bold foliage display was produced by the Palm Centre's groupings of silver- and dark-leafed plants, with a stunning Brahea at the back. 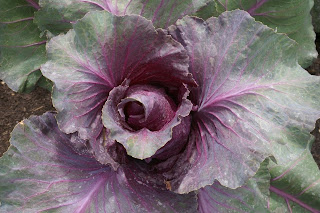 Fine foliage plants do not have to be tender rarities - the cabbage 'Kalibos'. 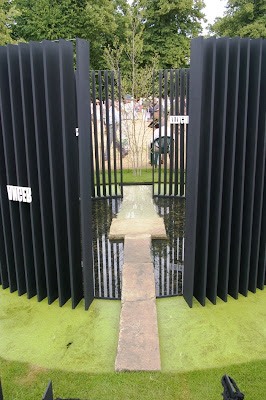 Conceptual gardens, for which Hampton Court is famous, tend to leave me rather cold - and their pretentious explanations stimulate a strong desire to vomit. This one, 'Journey to Awakening' by Makoto Tanaka, is rather in this category, but caught my eye because of its original use of duckweed as an effective ornamental plant (the light green ring around the vertical slats). This is what the explanation says: 'The water surface in the outer circle of the pond is completely covered with Lemna minuta (duckweed) which shows the sprouting of our desires. This plant prevents the viewer from reading the reflections of the words of our desires. And this plant has a very strong propagating power, just as our desires do. The wooden slats are the fully-grown manifestations of our desires, which restrict and block our view and make us divide into the self and the other world.'

The full ensemble of this group 'Hippo Wallow'  from Suzie Marsh can be yours for £1635. They would look good emerging from duckweed.
Posted by John Grimshaw at 08:19