An afternoon on Assateague Island 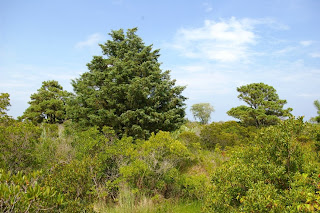 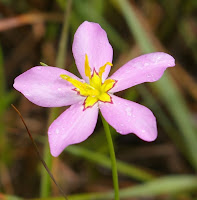 Last Wednesday my friend Guy Combes and I spent the afternoon on the Maryland section of Assateague Island, a long thin barrier island stretching across the state boundary to Virginia. It is effectively no more than a low ridge of dunes covered with vegetation in various successional states. The picture above shows a typical section of stabilised dunes with a conspicuous Juniperus virginiana with some Pinus taeda: elsewhere were woods of uniformly aged trees of this species. The island is not particularly botanically diverse, but there were a few interesting plants to be seen. To the right is a flower of Sabatia stellaris (Gentianaceae), which was growing in damp dune slacks. 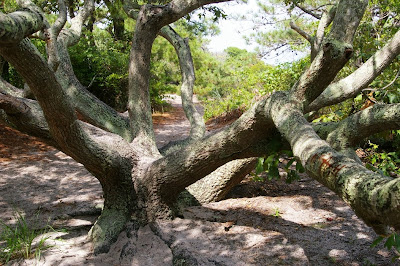 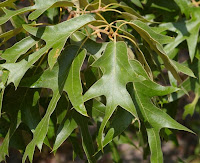 This oak, in uncharacteristic shape, appears to be Quercus falcata, which would normally be a straight-trunked large tree. Its identity is suggested by the comparatively poorly dissected leaves, which in some cases had only the apical and two other lobes, plus a softly hairy underside. 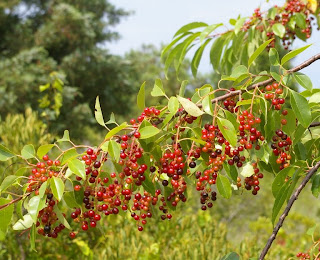 Prunus serotina, known in America as the Black Cherry, though Black Bird-cherry would be more apt, is also usually a large tree, but on Assateague grows either as a bush or a small tree. They were laden with fruits, which are an important source of food for birds. There were lots of birds around, but without binoculars it was impossible to get clear views of most. Tricolored Heron in the marshes was a lifer for me, though - a handsome bird in grey, white and russet - and it was nice to see Brown Pelicans flying over the sea. I also enjoyed seeing a pair of Horsehoe Crabs pushing along in the debris of the tideline (below). Amazing prehistoric creatures, they featured in one of my first books as a boy, Marvels and Mysteries of the Animal World, a large volume published by National Geographic, so I've always been interested in them. 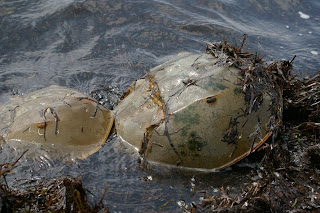 Assateague Island is most famous though for its 'wild' horses, reputedly descendants of survivors from a Spanish shipwreck. They are abundant - in the Maryland sector of the island they are given contraceptives to reduce their reproduction rate - and far from wild in behaviour, grazing placidly by the roadsides and around campgrounds, or, despite stern warnings, being fed by tourists. A couple of pics are below. 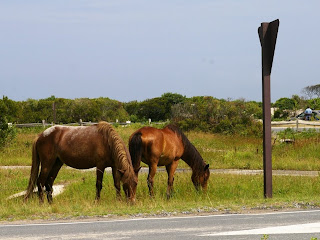 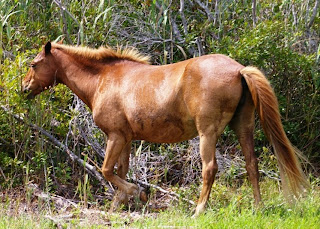