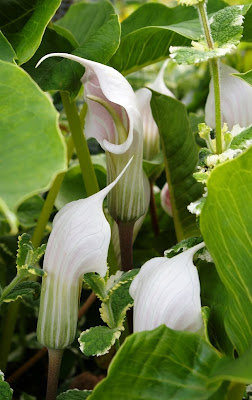 One of the most beautiful of its genus, Arisaema candississimum has been a popular garden plant since its introduction from Yunnan by George Forrest in 1914. Although its name means 'the most pure white' the majority of cultivated material in the UK is the form illustrated above, in which the spathe is softly suffused with pink. It seems to be a clone, or derivative seedlings, selected for its rapid multiplication, that has been promoted by the nursery trade over the decades. In good soil it multiplies like potatoes, producing masses of fat, knobbly, pink tubers. It does not set much seed, perhaps because as a clone grown in isolation it does not usually get cross-pollinated, but as it can produce fertile in such conditions seed it is not self-sterile. The seedlings resemble the parent in flower colour 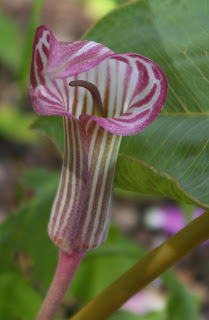 Forrest introduced two forms, the pale pink one and a pure white form (presumably the origin of its scientific epithet). The white one died out in cultivation and was not seen again until 1993, when it was found in Sichuan. Since then, however, it has appeared in huge numbers in cultivation through the collecting activities of Chinese plant dealers, so it is again easily available. I have not found it to be very persistent, however, and have lost all my plants, unfortunately, as it is a gorgeous thing. One group of A. candidissimum received from Chen Yi many years ago has persisted, though. These all have different coloration, ranging from brownish green to brownish-red: the darker ones, as seen here, are really quite striking.

In all clones the inflorescence emerges first - usually late in June - followed quickly by the leaves with three broad leaflets. These soon close as a canopy over the spathes and persist until autumn, when they can turn yellow and give a brief touch of autumn colour. It will grow in any good garden soil, though it should not be too dry in summer. The biggest danger is the risk of pranging the tubers during their long invisible, subterranean period: emerging so late does protect the plant from frost, but that bare patch is very tempting when a new plant needs a home...
Posted by John Grimshaw at 13:46