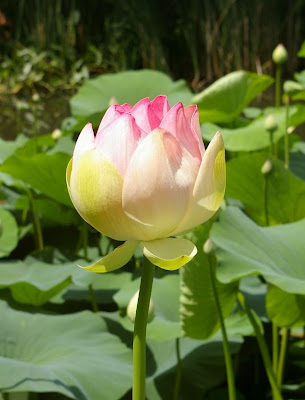 Nelumbo 'Mrs Perry D Slocum' at Chanticleer
I am aware that I haven't caught up with all the gardening things done and seen while I was in the USA, now over a week ago. To catch up here are a few snapshots from places visited. The overwhelming feature of the visit was the heat and humidity - I had not visited the East Coast at this time of year before. It was expected, but like entering a tropical greenhouse, the reality comes as a shock. But to this climatic feature, unknown anywhere in Europe, can be ascribed the success of so many plants that we find difficult or impossible to grow - the lotus (above), Lagerstroemia (see below) need it, and many magnificent trees are nurtured by it to statures undreamt of in Britain. 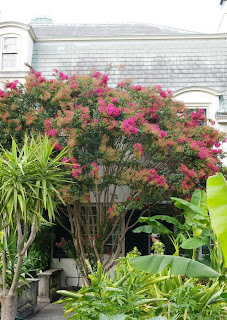 Lagerstroemia 'Tonto' and tropical planting on the terrace at Chanticleer
To my mind, Chanticleer is one of the most exciting gardens in the world, a place it is always a pleasure to visit for its aesthetics, its philosophies, its people, and above all for inspiration in garden-making. Formerly the home of the Rosengarten family, Philadelphia pharmaceuticals manufacturers, it is now owned by the Chanticleer Foundation, with Bill Thomas as Director. Under his wing is a team of talented gardeners, each given the freedom to express their own gardening and other skills in their sectors of the garden, with the result that it is never static or dull. 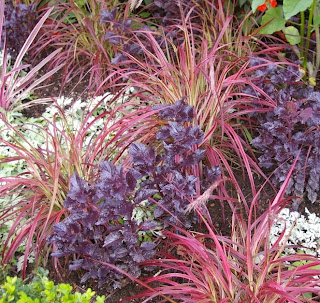 Pennisetum 'Fireworks', Perilla and Artemisia in a bedding scheme by Dan Benarcik 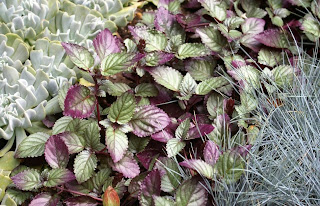 The trees (and gardens) on the campus of Swarthmore College are designated as forming the Scott Arboretum (Director, Claire Sawyer, Curator, Andrew Bunting). Including many truly magnificent specimens, they greatly enhance the attractive college buildings, largely built of finely grained grey stone, as well as providing an appropriate setting for the annual Woody Plant Conference. To the right is a fine American Elm (Ulmus americana), demonstrating the umbrageous crown that made the species so popular a street tree before the ravages of Dutch Elm disease, and so greatly mourned since. The Swarthmore trees are kept alive by regular injections of fungicide.
The Woody Plant Conference was a hugely enjoyable day combining learning, entertainment and conviviality (the evening was particularly convivial). For me the highlight of the day was the talk by Prof. Gary R. Johnson from the Urban Forestry & Horticulture Research Institute of the University of Minnesota, about the dangers of planting trees at the wrong depth and from unsuitable containers - a problem shamelessly ignored by the nursery trade. More information on their work can be found here. 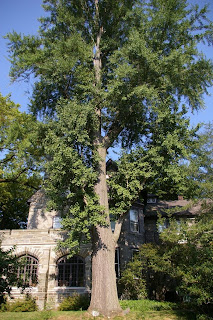 The speakers were put-up in the College's guesthouse, a slightly gloomy and cavernous, but well-appointed nearby mansion. Outside it grows the finest Ginkgo I've ever seen, with a superb straight and thick trunk (well over a metre in diameter). The campus and grounds are well-stocked with trees from the familiar to distinctly unfamiliar, such as Alangium chinense, a member of the Cornaceae (below). The Scott Arboretum specimen is featured in New Trees so I was pleased to pay homage and see that it is thriving. It has a huge natural distribution covering much of Africa and Asia, and clearly appreciates the hot summer. 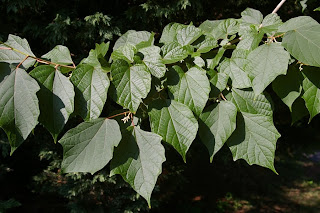 Horticultural Alliance of the Hamptons 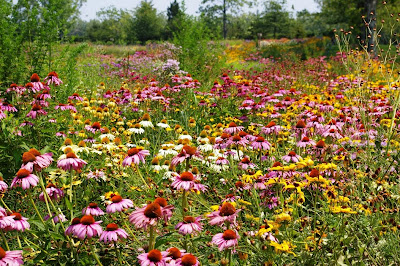 a nice area of prairie-style planting in the Hamptons
Following my visit to Pennsylvania I moved northwards, to the Hamptons at the north end of Long Island, New York, where I was guest speaker for the Horticultural Alliance of the Hamptons on a very hot Sunday afternoon. Although the turnout was not large, we had an excellent interactive meeting - it is always interesting to learn about local conditions from local gardeners. My kind 'chauffeur' Guy Combes and I stayed with Ernest Cavallo and Arthur Thomson at their charming home in Water Mill, where big tubs of Agapanthus by the pool gave a very Mediterranean feel. 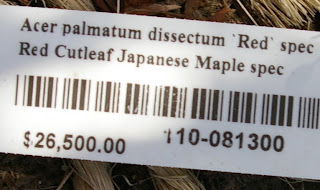 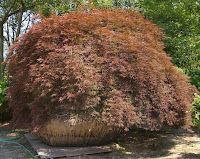 Ernie took us around to get a feel of the opulence of the properties in the Hamptons - I have to say I have never seen so much conspicuous expenditure in one area. Or perhaps I should say, evidence of it, as the denizens of the Hamptons are very fond of concealing their mansions behind high privet hedges. But in one horticultural way it was evident, in the form of the specimen trees available in nurseries, for instant planting effect. This balled-and-burlapped Japanese maple was the most expensive one I saw with a price-tag (at Marder's, Bridgehampton), but one could have anything from semi-mature weeping beeches to large cryptomerias from the same establishment.
The nurseries were full of well-grown, freely-flowering more normally sized, more normally priced plants. I was amused to see that Hydrangea paniculata 'Grandiflora' is generally known as PeeGee and also envious of the crepe-myrtles (Lagerstroemia) that, even in this cooler area, are widely grown for their summer effect. The cultivars available are now mostly hybrids between L. indica and L. fauriei, many of them having been developed at the US National Arboretum. All are hopeless in the cool British climate, alas. 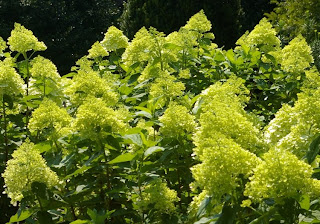 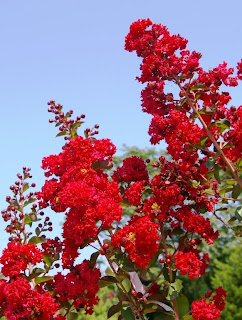 Lagerstroemia 'Dynamite' - the best red crepe-myrtle I have seen.
Posted by John Grimshaw at 22:03