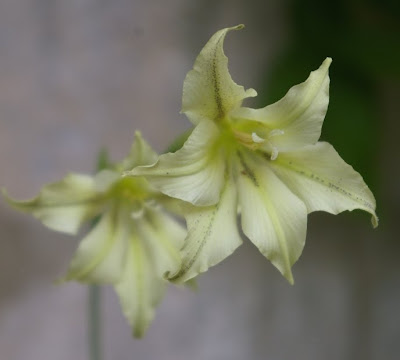 Flowering here for the first time is Gladiolus longicollis, a dainty species from the summer rainfall areas of eastern South Africa. I know it as a grassland plant on the slopes of the Drakensberg, for example on the Sani Pass. There it is usually tossed about by the wind, and with its flowers furled for most of the day it is not easy to photograph. The flowers open wide, like this, only in the afternoon, when they release a strong sweet fragrance, presumably to attract specific pollinating moths. Their long floral tubes (below) suggested the specific name, and are adapted to being probed by long-tongued moths.

G. longicollis is closely related to G. tristis, a more familiar species in gardens, that grows most frequently in damp places in the Western Cape. Although a winter-grower, G. tristis is moderately hardy in Britain and one imagines that G. longicollis should be even more so, should it be possible to build up sufficient stock to try it. I have one flowering corm and one with a solitary leaf from seed sown in 2003 - it has not been easy to get corms to survive and then fatten up. I grow it in the greenhouse during the summer, repotting in spring and feeding gently through the summer, storing the undisturbed pot totally dry over winter. 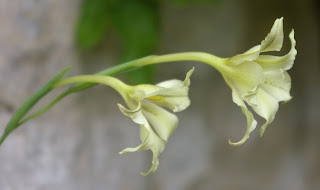