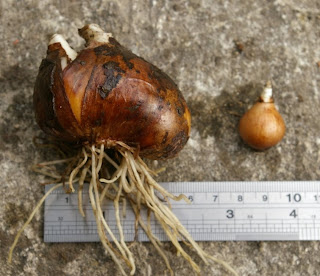 When lifting bulbs for chipping yesterday I unearthed this extraordinary specimen of Galanthus 'Natalie Garton', which is the biggest snowdrop bulb I've ever seen. It is composed of three noses within the tunic of the original bulb, but as they have not yet split away from the basal plate I think it is fair to regard it as one bulb. A normal G. nivalis bulb is alongside for comparison.

'Natalie Garton' is a robust supervolute with semi-double flowers. It has very broad leaves and some of us think it could be a genuine G. elwesii. It is named after the late Natalie Garton of Ramsden in Oxfordshire, who distributed it from her beautiful garden before her death in 1996.
Posted by John Grimshaw at 16:49