Not only pink, part 3: Nerine bowdenii 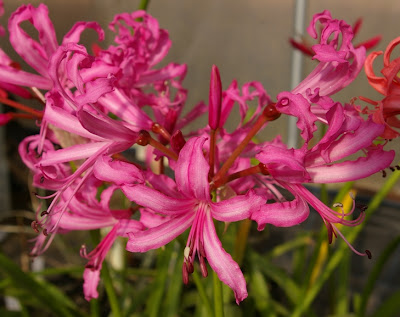 A dark pink clone of Nerine bowdenii selected by Stanley Smee
For most British gardeners, at least, Nerine bowdenii is the most familiar species in the genus; it can be seen in gardens throughout the country, often in large pink masses. It is totally hardy in this climate, but the myth persists that it needs to be planted against a warm wall. This is quite definitely not the case, as it has been shown that flowering is reduced if the bulb gets too hot, and as a summer-growing plant it needs ample moisture during the growing season, not often found at the base of a warm wall in summer. It thrives best in ordinary garden conditions with well-drained soil and full sun, preferably without much else growing around it.

Nerine bowdenii is found in two apparently disjunct populations in the wild. It was originally discovered in the vicinity of King William's Town , Eastern Cape, and plants from this population are still the most abundant in cultivation. They are typically rather bright pink, and the perianth segments (petals) are usually more or less smooth-edged, or slightly wavy. The cultivar 'Linda Vista' (right) is typical of this population.  A few hundred kilometres away the species reappears, on the cliffs of the Drakensberg where Kwa-Zulu Natal meets the Free State at Mont aux Sources. Here the flowering stems are perhaps a little taller, the flowers often a pale pink and the segments have strongly waved or crisped edges. This population is known by the invalid name var. wellsii and look rather different from the Eastern Cape plants: I believe they certainly deserve  taxonomic distinction, probably as a subspecies. Unfortunately I don't have a digital picture of this at present.

Both locations are in the summer rainfall area, and experience cool or cold dry winters. The plants are deciduous, losing their leaves in winter, and it is this critical fact that makes it hardy in Britain - they are effectively dormant through the worst weather. Even though the bulbs usually protrude from the ground they are seldom if ever damaged by frost. The plants leaf out in spring and grow through the summer, and have often withered before the inflorescences emerge, though if the soil remains moist the foliage may still be active at flowering time. 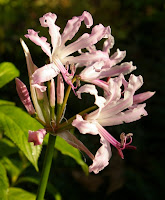 I find the ordinary bright pink of N. bowdenii a rather difficult colour to place in the garden, and think it's best grown away from most other plants blooming in September and October, but it looks good among grasses, and the subtle greyish greens often found in 'mediterranean' plants. As with any popular garden plant there are numerous cultivars selected for colour, floriferousness, height, etc, and there is even one with marginally variegated leaves, 'Mollie Cowie'. Many are rather indistinct and the names are often muddled in commerce, but some are well worth having. I prefer the paler shades of pink, such as those seen here: 'Marnie Rogerson' (left) and 'Pink Surprise' below. This is a poor example of 'Pink Surprise', with far fewer flowers than usual: I think it is one of the very best cultivars. 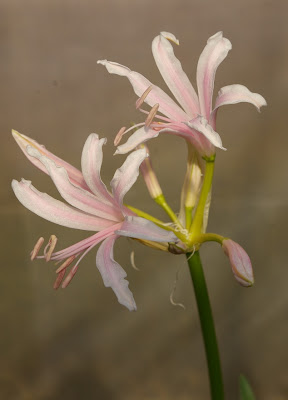 Nerine bowdenii 'Pink Surprise'
A clone that opens very pale pink and fades to almost white has been known for many years as 'Alba', but it is not really very special in either colour or vigour. In recent years some much better white-flowered clones have appeared, including 'White Magic' (below), which is pure white with a green keel on the outer surface of the perianth segments, a sure sign of it being a true albino. A clump of this doing well will be a magnificent sight, but as I have only one bulb at present there is some way to go!
﻿
Posted by John Grimshaw at 22:25