Not only pink, part one: Nerine sarniensis 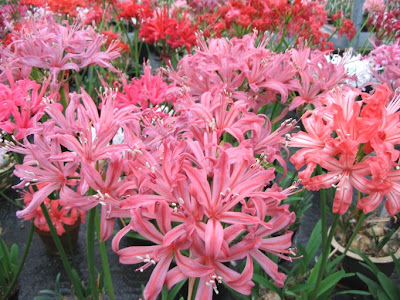 Nerine hybrids at Exbury, part of the Exbury/Vico Collection
The genus Nerine has a very special place in the autumn garden, providing seasonal interest and colour both in the greenhouse and outdoors. All come from South Africa, but they are spread between the winter- and summer-rainfall areas, so that although they all look rather similar, they have very different requirements in cultivation.
﻿﻿ 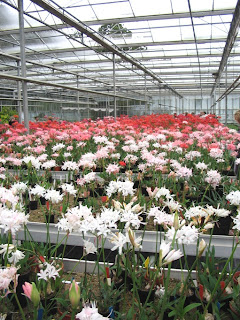 The first to be introduced, sometime in the seventeenth century, was Nerine sarniensis, which is common in the fynbos around Cape Town and would have easily been available for sailors to collect and bring home on Dutch East India Company ships. The story of the bulbs becoming established on Guernsey in the Channel Islands dates to the 1660s or so and, regardless of how it happened, this circumstance is responsible for the specific epithet sarniensis, which means 'of Guernsey'. As a typical winter-growing Cape bulb, N. sarniensis develops its foliage through the winter and spring and becomes dormant as temperatures rise and the soil dries out in early summer. This means that, in areas with cold winters, it must be grown under glass, usually as a potted plant, to avoid the leaves being damaged by the elements. Its flowers, in a huge array of reds, pinks and white, appear as temperatures cool and water becomes available in autumn. As an easily grown plant, needing only a cool greenhouse, it has always been popular and breeding and selection work was started in the nineteenth century. This work was continued here at Colesbourne by H.J. Elwes, and then onwards by a succession of breeders in western Europe, culminating in the work of Sir Peter Smithers in Switzerland, whose bulbs now form the core of the magnificent collection (above, and right) at Exbury in Hampshire owned by Nicholas de Rothschild. The diversity of the plants grown there can be seen on their website, but the printed version of their catalogue is, unfortunately, rather disappointing. Although generally thought of  as Nerine sarniensis, other species were used in the breeding programme from an early date, so most of the cultivars are probably not pure representatives of that species.
﻿﻿﻿﻿
﻿﻿﻿Breeding was not confined to Europe however, and Nerine sarniensis hybrids are also popular in Japan. Kees Sahin, the remarkable Dutch plantsman and seedsman, for whom I used to work, had an extraordinary tale about them. There was an old breeder who had a superb collection of plants, the result of a life's work. One day at flowering time he cut a bunch of the best stems and sent them to the famous Japanese plant breeder, Dr. Hirao, then destroyed all his plants and committed hara-kiri. What he had not bargained with was that nerines mature their seeds very quickly after flowering, and can do so even on a cut stem; Dr. Hirao was thus able to gather seed from the best clones in Japan and continue the breeder's work. The plant shown above is known as 'Hirao h81h' and is presumably a derivative of this original stock.