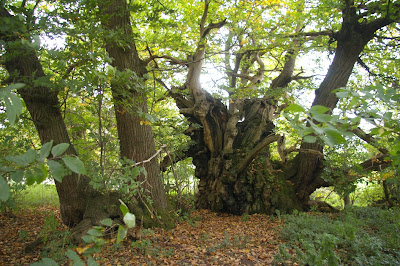 A wrong turn from the M5 yesterday put me in striking distance of Tortworth, in South Gloucestershire, so instead of turning round imediately I thought I'd A) get a baguette from the excellent Tortworth Estate Farm Shop, and B) take the opportunity to visit the Tortworth Chestnut. 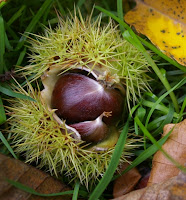 This is an ancient specimen of Castanea sativa, though as with so many old trees, its dating is open to question. The wildest claim is that it was planted in 800 AD, but that it was a notable feature by the early middle ages seems more certain. When it was first measured, by Strutt in 1766, it was 50' round, but since then the measurement of the main old trunk has diminished as it has decayed: when measured by the famous dendrologist Alan Mitchell in 1988 it was 33.5' (approx. 10 m) round.  H.J. Elwes's comment about it in The Trees of Great Britain and Ireland 'at present it is by no means a beautiful tree, and so much of the original tree is decayed, that no measurement is of much value', despite being written a century ago, remains apt today. What is of interest, however, is that the old trunk is surrounded by  several vigorous trees that have arisen from branches that have rooted where they touched the ground and have assumed an independent existence as the connection rotted away. The result is a grove composed of the same ancient clone, but the trees are all freely fertile and are currently bearing nuts. A free-standing chestnut in the adjacent paddock is presumably a seedling from the old tree. 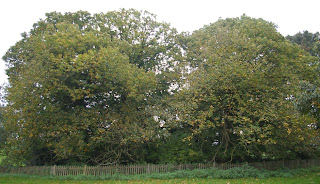 Whatever its age and current shape, it is evident that this is an important and much-loved tree. A plaque, now mounted on a gate to the enclosure, reads:
This tree supposed to be Six hundred years old, 1st January 1800
May Man still Guard thy Venerable Form,
From the Rude Blasts and Tempestuous Storm.
Still mayest thou Flourish through Succeeding time
And Last, Long Last, the Wonder of the Clime.

More prosaic is a plaque announcing its selection as one of fifty Great British Trees in 2002, selected by the Tree Council to commemorate the Queen's Golden Jubilee. The Tortworth Estate has numerous fine trees, the legacy of the third Earl of Ducie, who was a great dendrologist in his day and developed a fine arboretum at Tortworth Court, though he is perhaps most famous for having discovered the Corkscrew Hazel, Corylus avellana 'Contorta' in a hedge on the estate.
Posted by John Grimshaw at 19:18